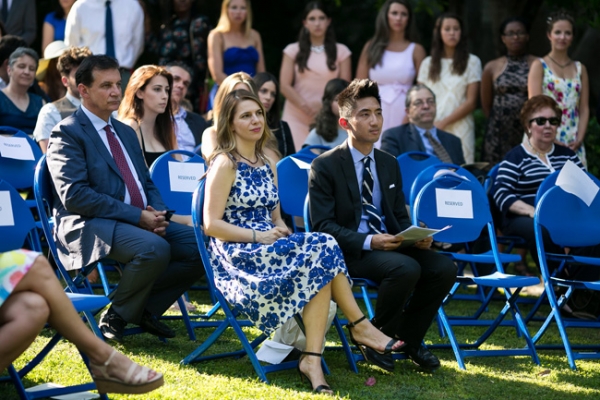 2016-2017 Fulbright Alumni, Maria Papanikolaou from the Greek Doctoral Dissertation Visiting Research Students program, and Steven Tagle from the U.S. Graduate Students program, took the stage and told the audience at the Fulbright Annual Awards Ceremony held at the U.S. Ambassador's residence on June 14, about their respective Fulbright experiences in the U.S. and in Greece:

One year ago I attended this ceremony as a new grantee. I was honored to be one of the first three Doctoral Dissertation Visiting Research Students to participate in the new launched program of the Fulbright Foundation in Greece. Christos Mavrodimitrakis, Konstadinos Chatzipapatheoridis and I spent six months in three different American universities and three different States, not only doing research in the context of our PhD studies, but also exploring the endless potential of this new program.

As an artist and as a researcher I attempt for more than a decade to comprehend the dynamic relationship between art, society and public space. Although I explore various forms of public art, graffiti plays a key-role in my research, simply because it is by far the most popular art practice encountered in the Greek public space. Fulbright gave me the opportunity to live and study in the place where it all started, and to understand the origins of this global art movement that initially appeared in Philadelphia and New York City in the 60s. During my stay I tracked down and reviewed critical for my dissertation literature and gained access to valuable material that I was unable to obtain back home. At the host institution I found for instance the transcript of the earliest PhD in my field and collected first-hand stories by interviewing the pioneers of this art genre.

The Fulbright exchange program for doctoral candidates has beyond doubt deepened my knowledge in this academic discipline and enhanced the scholarly outcome of my doctoral dissertation. Besides accomplishing the objectives of my research, due to the diligent support of the Fulbright Foundation and the Institute of International Education, the orientation and resources available, the network and the big Fulbright family I found in the United States, I managed to achieve much more. I re-evaluated the importance of diversity in the world and I created bonds that I sense will last in time. I never thought I would be so lucky, not only to meet and work with crucial for my research people, but also to be escorted by them to the airport during the last day of the program and to make common plans for the summertime.

I would like to congratulate all the new grantees. I wish you best of luck and success in this fascinating journey you are about to embark on. Based on my recent experience, I feel you will understand how valuable your Fulbright adventure was, when you return home and realize that out there, beyond the Atlantic Ocean, there is another place that feels like home.

Κυρίες και κύριοι, καλησπέρα σας. Thank you for joining us this afternoon to honor the Fulbright Foundation’s U.S. and Greek grantees, its friends, donors, scholars, and staff.

When I describe my year in Greece, I often feel like I’m describing a place I imagined rather than a place that actually exists. Where golden light strikes marble columns and sparkles over the wine-dark sea; where rowdy, curious, and clever characters drink and dance; where tradition and innovation, creativity, and chaos brew in a social and economic cauldron. As a fiction writer with an admittedly tenuous grip on reality, I’ve inhabited Greece the way a reader inhabits a book. “Reading” Greece this year has reawakening my senses and bound me to Greek and Syrian people whose mythic stories have challenged what I thought I knew about the crises, what I thought I knew about myself. I may be the newest reader of a book that spans millennia, but like Byron, Fermor, and Merrill, I’ve found a home in this country and hope to contribute to its pages.

I came to Greece through its mythology, intrigued by a people whose gods were as raucous, petty, and vindictive as they were noble and just. The landscapes of Greece retain the mystery and power of mythology. Thanks to Fulbright, I’ve visited many of these places, where our world still seems to touch the world of the gods. I’ve walked along the Acheron River, the “River of Woe,” whose spectral blue waters seem colored by the spirits of the dead. I’ve listened for prophesy in the rustling oak leaves at Dodona, and felt stalactites drip onto the back of my neck as a silent boatman ferried me through the caves at Diros. I’ve retraced Odysseus’s homeward path through the Ionian Islands and paid tribute to monsters Hercules had slain in the Peloponnese. Some days, traveling alone and outside my comfort zone, I walked on the edge of fear, knowing that beyond fear is awe, or δέος, the proper attitude for approaching the gods.

I saw δέος on a Naoussan boy’s face during Carnival when he put on the wax mask of the γενίτσαρος for the very first time. I learned to play Trex in UNHCR hotels and befriended an amorous Iraqi who had lost his legs as a child. My students at Aristotle shared their yiayias’ spoon sweets and their own stories of first love, of coming out, of overcoming anxiety, of living with HIV. I visited their hometowns, stations of my Syrian friends’ wayward journeys since the borders closed. I know which cheeses each island produces and for which dessert each village is famous. Now initiated, I’m a voracious reader.

A monk on Mount Athos gave me this advice: To write distinctly, live distinctly. In Greece I learned a different way to live. I’ve always held myself apart from people, but here, I was expected to spill into other people’s lives, to reach over them for food, to let myself need and be needed by them. Friends who have visited me in Greece say that I speak louder in Greek, that I’m more willing to talk to strangers, more willing to ask for help. And they notice how Greek people open up to me when I speak the language. When a Greek asks me if I’m part Greek, I respond, Ναι, η καρδιά μου είναι ελληνική. Completing my Fulbright year is a bittersweet accomplishment, like coming to the end of a beloved book. But as Greece has become part of me, so has my experience become part of the story of Greece. It’s a story I’ve only begun to tell.