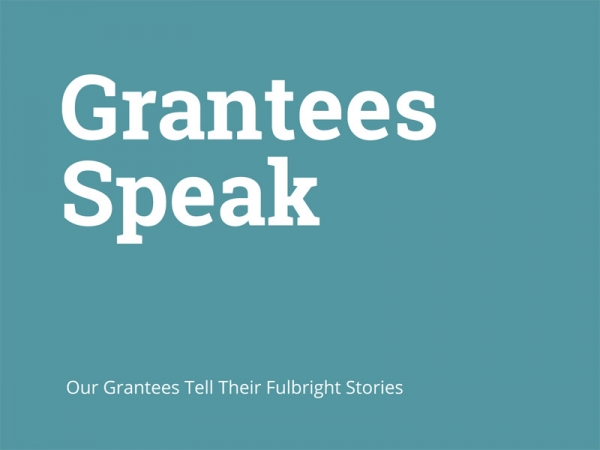 Grantees Speak!—In the Words of Our Greek and US Grant Recipients

The SUSI 2015 program for secondary educators was an absolutely awe-inspiring, wonderful experience. It was excellently organized and helped me gain insight into social, political, economic and cultural issues in the US as well as current trends and policy developments in secondary education and the academic environment. – Alexia Giannakopoulou, 2015 SUSI Program for Secondary Educators, Administrator’s Institute

I will not exaggerate if I say that my stay at Northwestern was one of the highlights of my academic life. I had the chance to be part of a highly stimulating community related to my topic of study. It was not difficult to fit in, from day one I felt part of the group, and I could closely follow every lab activity and project. As a result, although my Fulbright project initially included one small-scale experimental project, I ended up starting two more experiments—currently being run in the lab. – Dr. Christina Manouilidou, 2013-2014 Visiting Scholar Program, Northwestern University, Chicago, IL

During those five weeks I learned a lot; not only about Social Entrepreneurship, but also about myself and what I want. The classes and the site visits were really informative and the professors were effective in explaining the terms and all the subjects they wanted us to learn. They were willing to help us out, as best as they could, whenever we needed it for projects or classes, as were the three program assistants. Among the activities that I loved most during the program were the opportunities for volunteerism that really are life-changing and make you see the world from another perspective. – Ralou Tatari, 2015 Summer Institute for Student Leaders

In addition to the extremely friendly environment in the Hydrosystem Lab, where I am doing my Ph.D., the local Fulbright grantees helped me a lot to settle in. All the new Fulbright grantees that reached UIUC campus were warmly welcomed into the Fulbright community and together we have built a really helpful network for all subsequent new grantees who arrive at UIUC, hosting them in our places for a couple of days until they find a house, helping them with the initial paperwork at the university and the like. – Dimitris Fytanidis, 2013-2014 Graduate Student Program, University of Illinois, Urbana-Champaign, IL

The following questions were central in my project: How does art stimulate the mind's eye of those who are blind or partially sighted? How do we make visual culture—things like book illustrations, paintings, photographs and three-dimensional installations—accessible to people with vision loss? My interaction with the city’s highly accessible cultural institutions and organizations have helped me to expand my knowledge and ideas around this subject and to start seeing some possible answers. – Fotis Flevotomos, 2012-2013 Artist Program, New York Library, New York, NY

This fall, I have had the opportunity to travel to many archaeological sites and museum (in Northern Greece, Central Greece, and the Peloponnese) with the American School of Classical Studies. I make small sketches of buildings and artifacts that catch my eye—often column capitals, distinctive masonry, and statues. It’s a handy routine to have since some museums in Greece prohibit photography (like the Acropolis Museum), but I also draw objects that I take pictures of. I make these sketches to remember specific 3D aspects of an artifact (volume, tectonics, plan) so that I can return to them for reference as part of my dissertation research. Here’s a glimpse of the four notebooks I’ve filled with notes and sketches so far (about one notebook for every month that I’ve been in Greece this year). It looks like I may need to go to the bookstore soon to get more of these little books. - Samuel Holzman, Archaeology, University of Pennsylvania, 2015-2016 US Fulbright Student Program

When I applied to be a Fulbright Teaching Fellow, I wanted to do something totally different. I grew up in Hawaii and spent two years teaching there. My friends and family wondered why I wanted to move to the other side of the world. It seemed so far to them. I didn't really know what to expect when I came to Greece but what I found was a community of talented and hardworking individuals, all of whom are working to broaden their world experience. I found a vibrant culture that was so much more than the ancient history I had learned about in school. I discovered the generosity and hospitality of the Greek people. I found that I had so much more to learn. What makes Fulbright Greece so wonderful to be a part of is that it puts you in a position to do just that -- to learn. This experience has helped me grow both professionally and personally, and I couldn't be happier about my decision to move to the "other side" of the world” - Dylan Smith, Educational Leadership, Chaminade University of Honolulu, 2015-2016 Fulbright English Teaching Fellow

I am in Greece this year to research renewable energy policy and development. My meetings with regulators, academics, NGOs, and businessmen have broadened my understanding of energy policy in practice. Analyzing renewable energy policy solutions for Greece has required going beyond factors such as the industry’s access to capital and the government’s stance on the environment; it has demanded diving deep into Greece’s complex economic and political challenges and examining the way that the energy sector is directly tied to the economy and politics of this country. As I step further into this political, economic and social maze, the way through it becomes ever more enticing and elusive!
While my experience has been academically broadening, it has also been enriched by exposure to Greek culture. I felt especially connected when I had the opportunity to help with a Greek family’s olive harvest. I learned how to brush the olives off the trees with a special plastic fork, how to separate stones and leaves from the fallen olives and how the olive press turns bags and bags of olives into fresh green oil. The cultural significance of the event became clear at the olive press: both serious producers and family farmers wrote their names first-come first-served on a chalkboard, waited their turn to run their olives through the communal mill and filled their well-worn plastic barrels with new oil. As I watched an old couple walk away together, the man and woman each grasping one handle of their jug, I could feel the still-significant rhythms of Greek agriculture and imagine the centuries of olive harvests on this land. - Caroline Palmer, Energy, Georgetown University, 2015-2016 US Fulbright Student Program

Life and work in Greece over the past four months has been a non-stop thrill. On the work side of things, I have managed to connect with key individuals in both the Greek Archaeological Service and the general field of Greek archaeology. Although I have had some hurdles to overcome with regard to obtaining the proper study and transport permits, I am happy to say that this process is now complete and all of my study material is now safely in the Wiener Laboratory at the American School of Classical Studies in Athens (ASCSA). It is through this process that I was able to develop a collaborative relationship with an archaeologist in the Greek Archaeological Service who has significantly helped me in my background research and practical matters. While I was waiting for my study material to become available to me, I was able to take advantage of some of the intensive educational trips offered by the ASCSA. Through these trips I was able to see many parts of Greece that I had never visited before as well as see archaeological sites and museums that are not often open to the general public. As a bioarchaeologist specializing in Mediterranean archaeology, these trips have given me a much broader and deeper appreciation for the intricacy and antiquity of Greek culture.
Over the course of the last four months I have forged friendships with my Greek colleagues in the Wiener Laboratory who have taught me about Greek traditions I was previously unfamiliar with. Their encouragement as I have acclimated to Greek life has been wonderful. I am taking a course in Modern Greek which is challenging but very much appreciated as I try to communicate more in Greek. All in all, I have learned a great deal and tried many new things in my time here so far. I am eagerly looking forward to what the next few months hold. - Kaitlyn Stiles, Anthropology and Archaeology, University of Tennessee, 2015-2016 US Fulbright Student Program

Education: The Most Powerful Investment in Our Future - Thank you Fulbright Donors!
From Virtual to Reality!
Mani Through the Senses