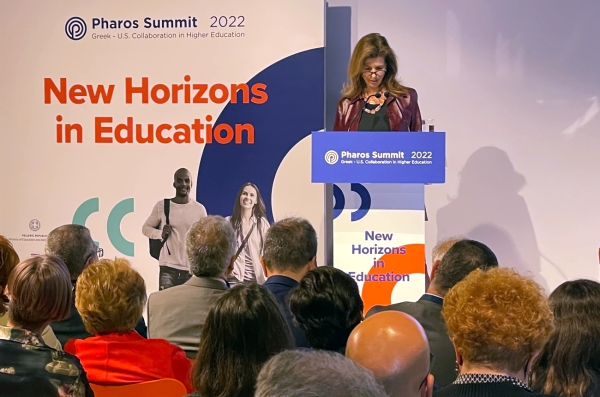 Pharos Summit 2022: Greek – U.S. Collaboration in Higher Education
is an initiative spearheaded by the Ministry of Education and Religious Affairs in collaboration with the Institute of International Education (IIE), the U.S. Embassy in Athens and Fulbright Greece.

The International Academic Partnership Program (IAPP) – Greece was launched in 2019 as a partnership between the IIE and the Ministry of Education and Religious Affairs. A delegation was originally scheduled to arrive in Greece in Spring 2020; however, the pandemic required programming to be put on hold. During the two years of the pandemic, the momentum continued virtually and more U.S. institutions joined the program. This first in-person delegation finally arrived in Greece in November. It was comprised of 30 U.S. universities and colleges represented by 70 university leaders and faculty members who met with rectors and faculty from all 24 Greek public universities.

The Greek – U.S. Collaboration in Higher Education is an important milestone towards the internationalization of Greece’s higher education system and the promotion of the English-language programs of Greek universities. The Ministry of Education and Religious Affairs has addressed bureaucratic barriers, thereby facilitating academic and student mobility and focusing on partnerships with international institutions. Fulbright alumni were included in the U.S. delegation and also represented the 24 Greek universities. The visit kicked off November 5-11 with a two-day opening event at the Stavros Niarchos Foundation Cultural Center (SNFCC).  Keynote speakers and government officials included Prime Minister Kyriakos Mitsotakis, Assistant Secretary for Educational and Cultural Affairs Lee Sutterfield, Minister of Education and Religious Affairs Niki Kerameus, U.S. Ambassador to Greece George Tsunis, and IIE President Allan Goodman.  Fulbright Executive Director Artemis A. Zenetou was invited to present the Foundation’s work on educational exchanges since 1948 and the role Fulbright will play in the steps forward.

Zenetou highlighted the significant contribution of Fulbright exchanges and U.S. affiliated institutions in Greece like the American School of Classical Studies at Athens (ASCSA), American College of Greece-Deree, Anatolia College, American Farm School, College Year in Athens (CYA), and Athens College. With decades of experience, they have done a superior job of creating secure environments for foreign students and insuring their interaction with Greek counterparts to the benefit of both.

Based on the Open Doors annual report on scholar mobility, which has a history in Greece of more than a century, the number of U.S. scholars in Greece is again on the rise. This is the result of concerted efforts among a number of U.S. affiliated institutions/study abroad programs in Greece. The potential in Greece is high and there is ample room for all, with newcomers and new partnerships more than welcome. Individual U.S. institutions are already on the scene with Harvard’s Center for Hellenic Studies in Nafplion being active for many years, a Princeton branch office in Athens, and the New York University Global Research Institute in Athens.

Pharos in Greek means lighthouse, and this historic delegation shone a light to enable U.S. and Greek institutions to move forward together to create more opportunities for international educational exchange. 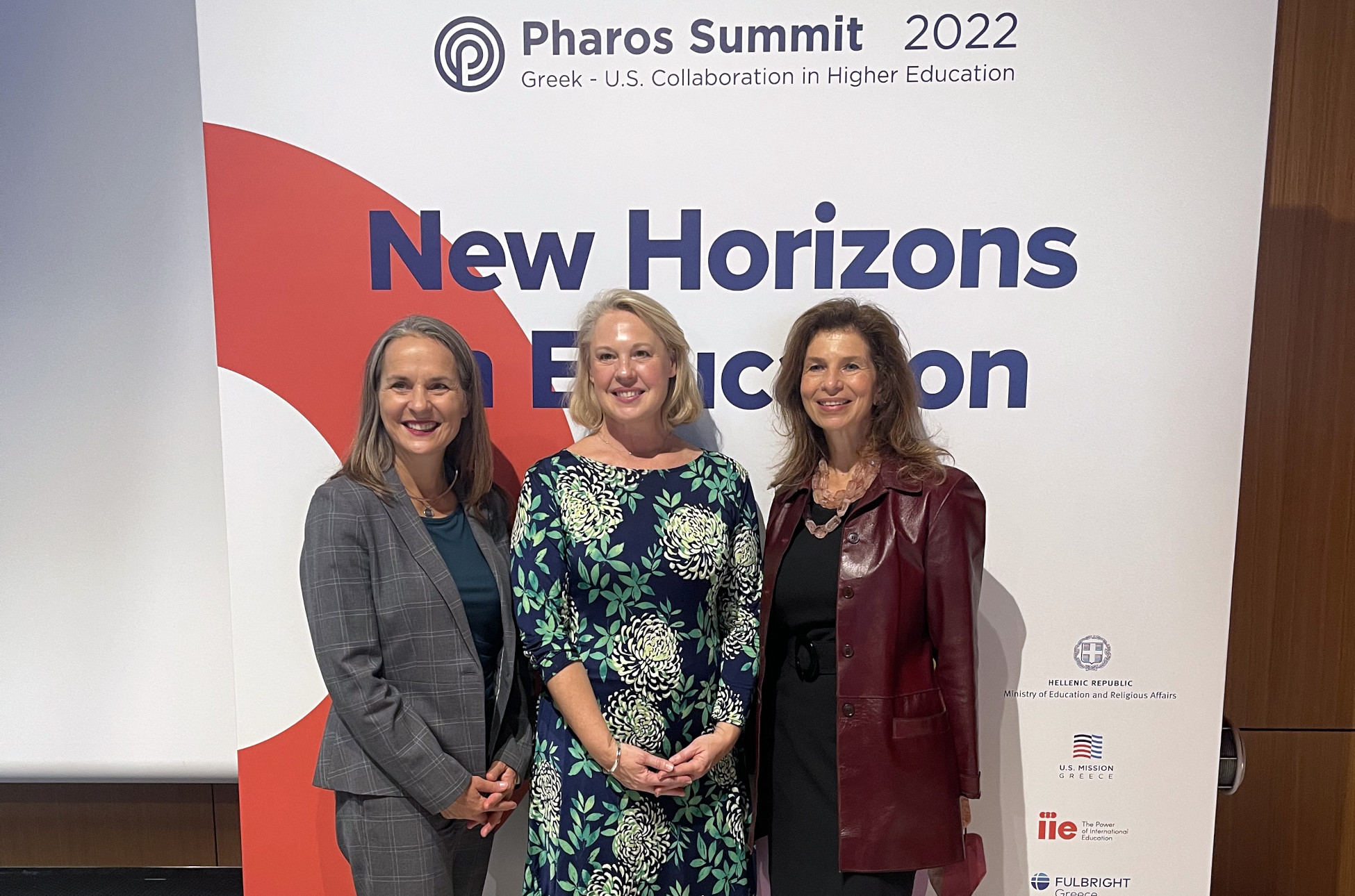 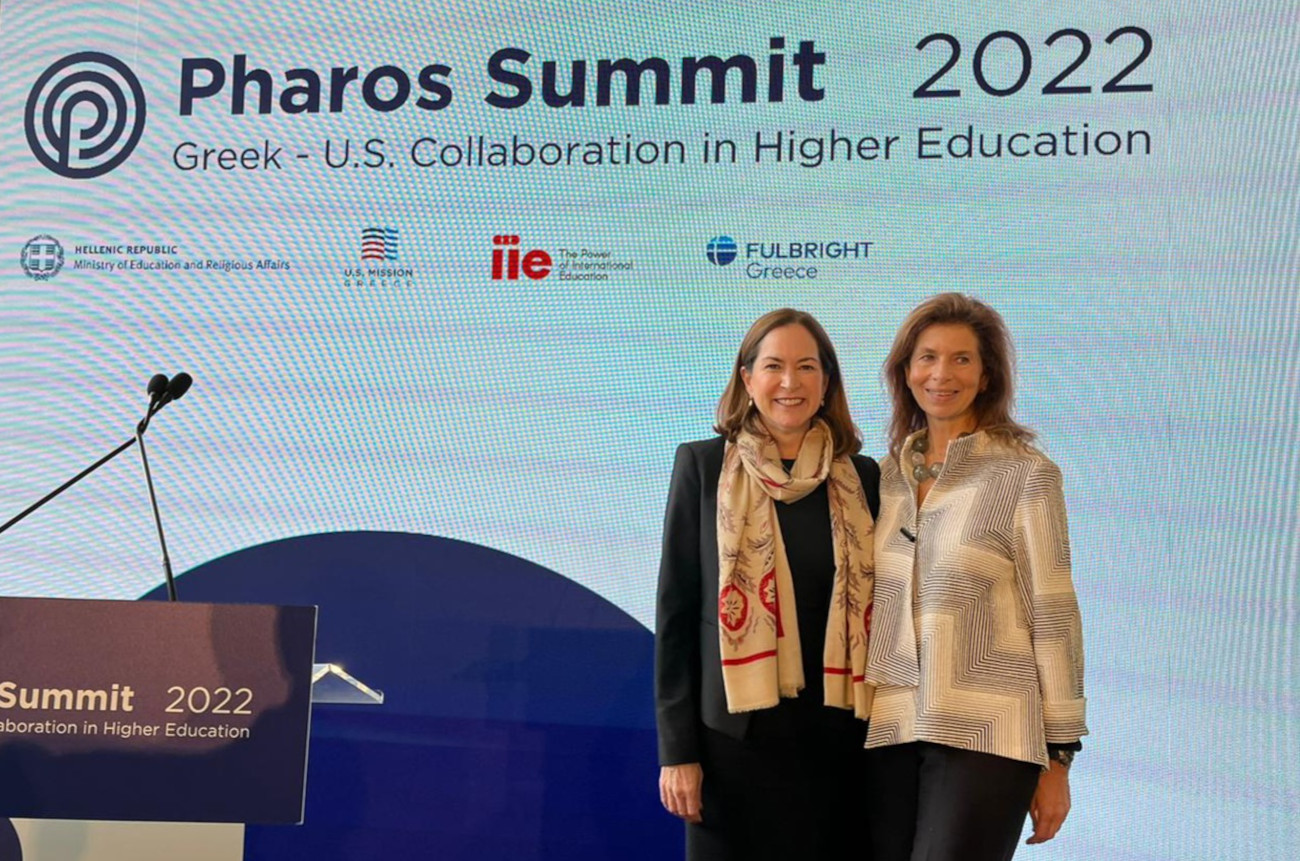 From left: Assistant Secretary of State for the Bureau of Educational and Cultural Affairs (ECA) Lee Satterfield with Fulbright Executive Director Artemis Zenetou

Pharos Summit 2022
An Educated Mind Can Teach Many
Where are they Today? A Live Webinar with Alumni Advisees on U.S. Undergraduate Studies
Nov 15, 2022
Nov 15, 2022