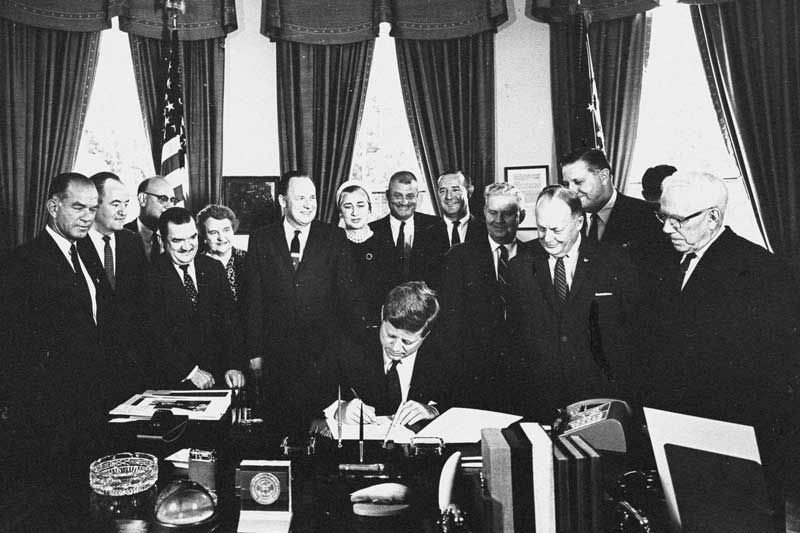 In September 1945, the freshman senator from Arkansas, J. William Fulbright, introduced a bill in the U.S. Congress that called for the use of proceeds from the sales of surplus war property to fund the promotion of international good will through the exchange of students in the fields of education, culture, and science. One year later, President Harry S. Truman signed the Fulbright Act into law.

The program that came to bear Senator Fulbright’s name has proven to be the most valuable investment in international cooperation. His experience as a Rhodes Scholar in England convinced him that the way to achieve peace in the world was for people of all countries to get to know and respect each other's traditions, cultures, and values. Based on the Rhodes model, he created a program, with the whole world as its stage, that would simultaneously encourage students from as many countries as possible to study in the United States while persuading young Americans to live in, know, and understand Africa, Asia, Europe, the Western Hemisphere, and the Asia-Pacific. The program was originally financed by the sale of U.S. surplus war property, and later by U.S.-held foreign currencies from the sale of grain abroad and by funds appropriated by Congress. Today, the primary source of funding for the Fulbright Program is an annual appropriation by the U.S. Congress to the Bureau of Educational and Cultural Affairs (ECA) of the U.S. Department of State. Participating governments and host institutions, corporations, and foundations in foreign countries and in the United States also provide monetary and in-kind support.

The binational approach is the hallmark that distinguishes this academic exchange program from most others, both public and private. The final legislative underpinnings of academic exchange came with the Mutual Educational and Cultural Exchange Act of 1961. Also known as the Fulbright-Hays Act 1961 (co-sponsored by Congressman Wayne Hays of Ohio), it endorsed the cooperative approach of the Fulbright Program, enlarged its scope, and extended it geographically.

Of all the examples in recent history of beating swords into plowshares, of having some benefit come to humanity out of the destruction of war, I think that this program in its results will be among the most preeminent. —President John F. Kennedy in remarks at the ceremonies marking the fifteenth anniversary of the Fulbright Program, August 1, 1961.

Today, the Fulbright exchange program has matured into an international success story. From a modest program that brought 35 students and a single professor to the United States and sent 65 Americans abroad in 1948, Fulbright has grown into the premier international educational exchange program in the world. More than 400,000 "Fulbrighters" have participated in the Program since its inception. Fulbright alumni serve in leadership positions in government, academia, business, the arts, science, journalism, and other fields.

A Tradition of Excellence – Quick Facts about the Fulbright Global Program:

Within the global Fulbright Program,

What is the Fulbright Program – watch the 3 minute film