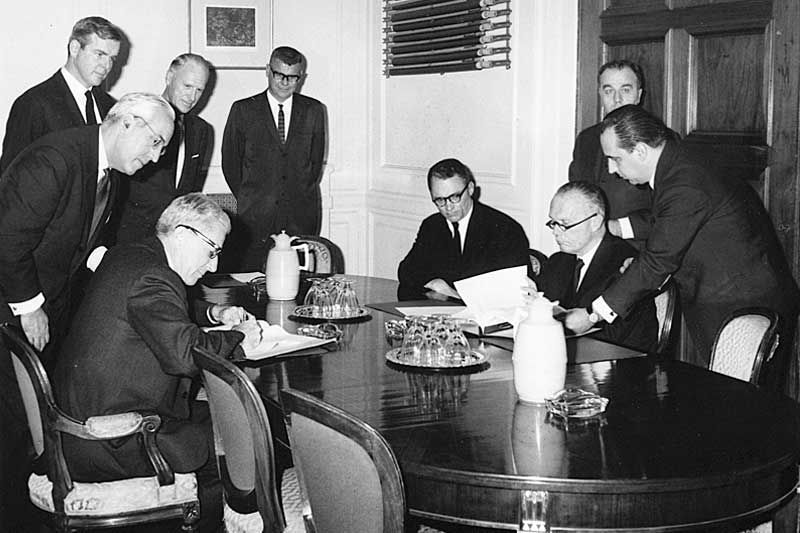 The executive agreement between the governments of the United States and the Kingdom of Greece was signed on April 23, 1948. This binational agreement put into operation the program of international and cultural exchanges known as the Fulbright Program.

The first—unofficial—Executive Director of Fulbright Greece was the renowned archaeologist and photographer, M. Alison Frantz, who served as Cultural Attaché of the U.S. Embassy in Athens from 1946–1949 and was the official photographer of the Athenian Agora Excavations from 1939 until 1964. She was instrumental in laying the foundations for the Program and getting it off the ground.

Having served on the Fulbright Board of Directors in 1950, Bert Hodge Hill, an American Philhellene, authority on ancient Greek architecture, archaeologist, former Director of the American School of Classical Studies in Athens (ASCSA), and an instrumental figure in the founding (1925) of Athens College (the Hellenic American Educational Foundation/HAEF) became the first—official—Executive Director of the United States Educational Foundation in Greece.

In its early years, the Foundation awarded scholarships and travel grants to Greek citizens to study in various educational institutions in the United States and to attend the four American-sponsored schools in Greece: Anatolia College and the American Farm School in Thessaloniki, and Athens College and Pierce College in Athens. For a number of years, American teachers of English received Fulbright-funded teaching assignments at each of these schools as well as at several Greek institutions around the country, while American scholars taught at Aristotle University and at the National and Kapodistrian University of Athens.

Language difficulties and the lack of suitable library facilities in Greek institutions made the American School of Classical Studies at Athens, with its long history in Greece, a natural destination for US scholars. ASCSA has been one of the main beneficiaries of the Fulbright Program in Greece. Since 1948, more than 350 American students and scholars have received grants to attend the ASCSA.

Over time, conditions in Greek educational institutions made it easier to host U.S. students and scholars. On December 13, 1963, the new educational exchange agreement between the governments of Greece and the United States was signed. This translated in to an expansion of educational and cultural exchange opportunities and activities. Today, scholarships are awarded in all fields and disciplines to students, professors, educators, researchers, and artists.

Since 1948, the Foundation has offered free educational advising services to thousands of individuals and has awarded grants to more than 6,000 Greek and American citizens. The Foundation engages its Alumni in a variety of programs and develops opportunities to further the impact and multiplier effect of Fulbright grants. Each year, approximately 60 Greek and U.S. citizens receive grants to study, teach, or conduct research in the U.S. and Greece, respectively.

Learn more about Fulbright Greece history: For the sixtieth anniversary of the Fulbright Foundation in Greece, in 2008, the Foundation produced the publication, In Greece since 1948, which highlights key events in its history and includes archival photos. A film, The Fulbright Experience, was also produced, which features interviews from U.S. and Greek grantees and alumni. For its seventieth anniversary in 2018, the Fulbright Foundation in Greece released a new documentary film, 70 Years Fulbright Greece - Building the Future Through Education, with archival material and video portraits.