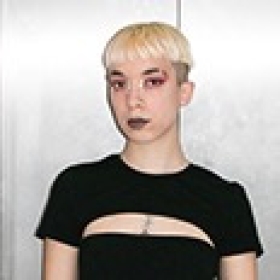 Antigoni Tsagkaropoulou / Bunny (they/she) is a visual artist from Greece, based between Athens and Berlin. They hold a B.A. from the Athens School of Fine Arts and they will receive an MFA in Design Media Arts at UCLA, CA, with a Fulbright scholarship, starting in Fall 2022. In their work, they envision alternative universes where subversive characters thrive to re-imagine a less traumatic past, critique the present and anticipate a future that is not dependent on the existing historical and social infrastructure. In their methodology, the social component is paramount, while radical fluffiness is being used as a means to foster intimacy and interaction. Their visionary worlds attempt to build bridges of kinship between art, alternative ways of learning and social activism. They have realized several large-scale projects (ex. Fluffy Library) and participated in major exhibitions in Greek and international institutions such as a solo show at the Arnolfini Center of Contemporary Arts in Bristol, a solo show at B. & M. Theocharakis Foundation for the Fine Arts & Music, a one-year residency at the ATOPOS cvc, a summer school at the Royal Academy of Dance in London, the 6th Thessaloniki Biennale of Contemporary Arts, the Athens Biennale OMONOIA, Wrightwood 659 in Chicago, Kunsthalle Exnergasse in Austria, Athens and Epidaurus Festival, Goethe Institute of Athens, The Breeder Gallery, Sophienshaele Theatre, HAU Hebbel Am Ufer Berlin, KW Institute for Contemporary Arts, the Alternative Stage of the National Opera of Greece, Thessaloniki International Film Festival among others. Their latest project “Dentata Pearls” was commissioned and produced by STEGI Onassis Foundation in Greece. They have worked and collaborated with artists such as Annie Sprinkle, Brooke Candy, Annea Lockwood, Willem Pope L.

After years of developing a practice across a range of mediums, during their Fulbright scholarship they will explore the rich and ever evolving field of Media Arts and the areas of interactive media, time-based work, virtual environments, and information spaces. 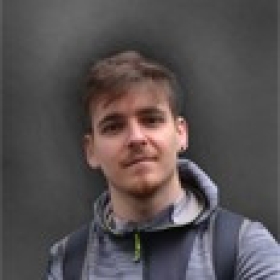 I studied Architecture at the National Technical University of Athens. My research field is architectural design and theory. To me, theory and design are mutually interdependent and design-driven research in my opinion is the proper scientific method that “shapes” the theory of architecture as design. It has the potential to embody and refer to all the aspects that are connected with architecture such as social issues, culture, sustainability, building technologies and so on. I have taken part in Panhellenic and international competitions in collaboration with fellow architects or offices in Greece and abroad and twice our project was among the finalists of competitions. I have more than 2 years of professional experience, which includes an internship in the office of Potiropoulos + Partners and a later collaboration as Associate Architect, while currently I am working as a Project Architect in the office of Katerina Valsamaki Architects. My projects have been published in several sites / e-magazines like: Archisearch, Kataskeves Ktirion GR and GRAD Review.

With the support from Fulbright and also having being awarded a scholarship from the University, I will attend Cornell’s AAP Post-Professional Master of Science in Advanced Architectural Design program starting in summer of 2022. The M.S.AAD seems to be a challenging program that will bring me up against theories, ideas and technical knowledge that I have not yet faced, while simultaneously it will provide the opportunity for deepening in areas that have already stimulated my interest. Moreover, having being selected for a teaching assistantship position, I will have the opportunity to acquire some teaching experience, which is essential for me since the methodology of teaching architecture is something that really interests me. Besides architecture, I am a musician, I have a State degree in classical guitar (EQF Level 4) and am actively involved with the music scene by performing in many different music genres. 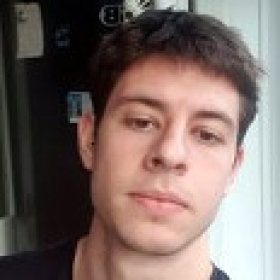 I studied Archaeology at the National University of Athens and applied for the Maritime Archaeology program at East Carolina University from where I got accepted as a scholar. My interest so far lies in underwater projects around the Mediterranean, consequently, I have been part of many different underwater surveys and excavations on different Greek islands.

As a Fulbright Fellow, I aim to strengthen mutual understanding and collaboration among Greece, the U.S., and other countries around the world. 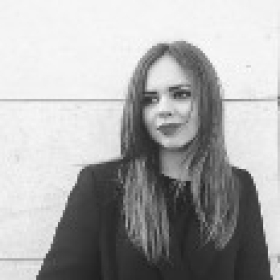 I am a National Technical University of Athens and Deree-The American College of Greece graduate in Architecture and Communication, respectively. At NTUA, I achieved to graduate at the top 5% of my class, while at Deree College, I studied with the generous financial support of the Deree Merit Scholarship and Stavros Niarchos Foundation Scholarship. Moreover, I attended the course Principles of Real Estate at Harvard Summer School (2021) as a Latsis Foundation scholar. At the same time, I pursue my second Master’s Degree at NTUA (MSc in Research in Architecture), wherein I received a fellowship for teaching assistance during the academic years 2021 and 2022. The topic of my undergraduate thesis concerned the urban reintegration - through the adaptive reuse of a historical building complex - of an urban block to the broader urban landscape with the functional and symbolic pole of the Attikon cinema, which remained inactive for almost ten years. We proposed a new mixed program of land uses, ranging from entertainment to housing, ensuring economic and urban sustainability.

After gaining some industry experience, I decided to return to academia; I applied for the Master of Science in Real Estate Development at Columbia GSAPP. The particular interdisciplinary program will complete my architectural background with knowledge on finance and management, while it will equip me with a significant advantage to enter the job-market as a real estate professional. Through this academic experience, being also a Fulbright Fellow, my goal is to work for mutual understanding and respect in a global level.