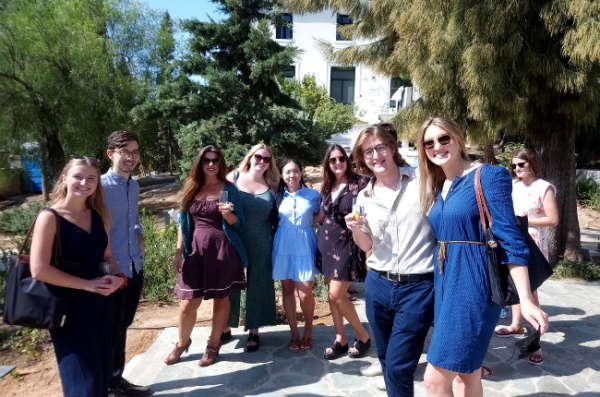 After a Long-Anticipated Arrival, Welcome Fulbrighters!

In late September, we welcomed the first cohort of U.S. grantees with a hybrid orientation program to connect, network, and provide a smooth transition to the host country. Emily Parks, a 2021–2022 U.S. Fulbright English Teaching Assistant to Greece, summarizes the series of events and highlights from the Orientation:

After a long-anticipated arrival in Greece, six Research Students, eleven English Teaching Fellows, and two Scholars began the U.S. Fulbright program this September with a fall orientation session, held on September 28 and 29.

Prior to the formal orientation, our first engagements were hosted through online meetings. In conversations with Fulbright staff and U.S. Embassy Public Affairs Officials, we were given advice on how to make the most of our year in our new “home away from home”.

The first day of Orientation was held online, allowing us to hear from a wide variety of experts on various topics. Conversations were held on diversity and identity in modern Greek culture and on contemporary Greek politics and society through the lens of modern Greek holidays. These were given by two College Year in Athens faculty members, Aimee Placas and Romolo Gandolfo, respectively, who each offered perspectives on moving forward and engaging with Greek culture as newly-arrived Americans. Fulbright alumnus Steven Tagle also shared the story of his Fulbright experience and how the many connections he made have helped propel him on his career path today.

The best was saved for last, and the highlight of our Orientation was held in-person on the final day. Fulbright staff and board members, researchers, scholars, fellows, alumni, and representatives from both the U.S. Embassy and the American School of Classical Studies all came together for the first time as a group at the beautiful Gennadius library. After light refreshments and a round of introductions, we were all treated to a guided tour of the library’s current exhibit, The Free and the Brave: American Philhellenes and the ‘Glorious Struggle of the Greeks’ by Dr. Maria Georgopoulou, Director of the Gennadius Library. Organized in celebration of the Bicentennial of the Greek War of Independence, the exhibit focused on the importance of Greek and American interactions during this important time in history. I believe I speak for many of the Fulbright grantees in that this experience shined a light on new knowledge of the history of both countries and inspired us to carry on the legacies of these historic Philhellenes through our work here in Greece.

These topics and more were discussed while lunching as a group at a nearby restaurant. After many months of online meetings, this was a wonderful opportunity for us to engage on a more personal level, share details about our projects, and find new connections—truly a great start to our year as Fulbright grantees.

*Contributed by Emily Parks, 2021–2022 U.S. Fulbright/Athens College Fellow to Greece. Emily is a graduate of the University of Miami, Miami, FL and holds a BA in English Literature and Art History.

New Jewels of Greek-American Culture: Ergon
Considering a Master of Laws in the United States?
Nov 30, 2021
Nov 30, 2021
Art and Technology: Engineering the Past in "Desire for Freedom"