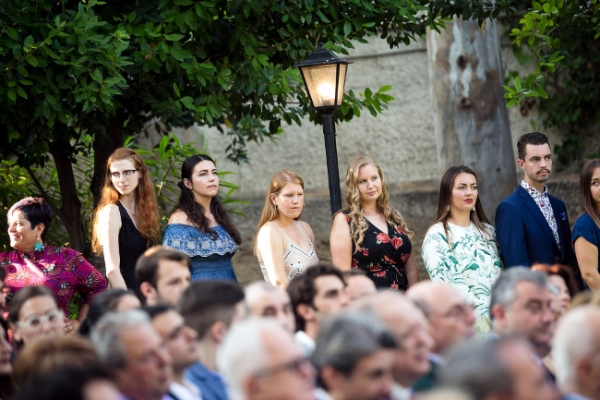 On Thursday, June 20, 2019, U.S. Ambassador Geoffrey R. Pyatt and Mrs. Pyatt, held a reception at their home, Jefferson House, to honor 2019-2020 Greek and American Fulbright Scholars and Fulbright Donors. The Ambassador, together with the Minister of Education, Research and Religious Affairs Kostas Gavroglu, Minister of Foreign Affairs Giorgos Katrougalos and Fulbright Executive Director Artemis Zenetou, congratulated the 72 Greek and American recipients of Fulbright scholarships who were selected after rigorous review from a large pool of extremely qualified candidates.

Fulbright Scholars encompass a diverse range of academic interests, from optometry and dermatopathology, to industrial management, counseling psychology and school psychology, from somatic and museum practices to inclusive education and youth, education and closing the skills gap, journalism, meteorology, cultural and intellectual history, and global health. U.S. institutions where Greek scholars will study include University of Minnesota, Emory University, Duke University, Iowa State University, University of Pittsburgh, The University of North Carolina at Chapel Hill , and Temple University at Philadelphia. U.S. scholars will study in various academic and research institutions in Greece such as the Hellenic American Educational Foundation, Athens University of Economics and Business, National Centre for Scientific Research “Demokritos”, Foundation for Research and Technology – Hellas, American School of Classical Studies at Athens, University of Macedonia at Thessaloniki, Ministry of Environment and Energy, Technological Educational Institute of Crete, and other.

The binational approach is the hallmark that distinguishes the Fulbright academic exchange program from most other exchange programs either private or public. Fulbright Executive Director Artemis Zenetou acknowledged the support of the Government of the United States, the Government of the Hellenic Republic and mentioned that the growth of the Fulbright Scholarship Program also relies on the invaluable support from Donors, other foundations, organizations, corporations and individuals both in Greece and in the United States.

The Fulbright Foundation gratefully acknowledges the continued support of its Donors. Visit the link to see 2019-2020 Donors.