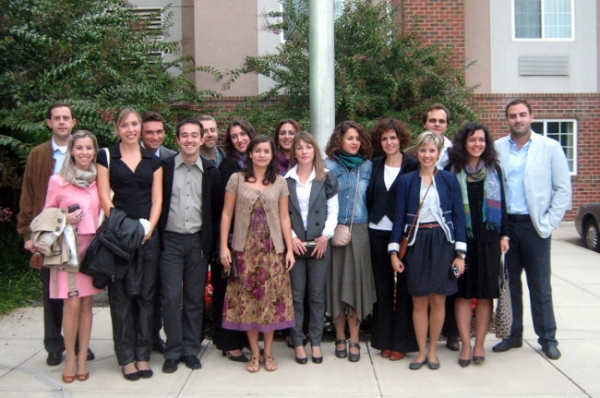 On the occasion of the Foundation’s 60th anniversary in 2008, Fulbright Greece received a special grant from the Bureau of Educational and Cultural Affairs of the U.S. Department of State to organize a training program for Greek public school educators. The Greek Teachers Professional Development Program (GTPDP) began in the Fall semester of 2010. The eight-week program for Greek secondary education teachers of the humanities was hosted by the College of Education and Human Development at George Mason University (GMU). Twenty teachers from public schools across Greece were selected to participate in the program (link to list), which was designed to help the teachers think systematically about their practice and learn from experience.

The program offered a unique opportunity for participants to share their teaching experiences, develop classroom methodology, and increase international understanding between Greek and American teachers. The program included academic training, field experience in diverse secondary schools, and cultural enrichment trips. During the eight weeks at George Mason University, the participants took courses in educational methods, teacher leadership, reflective practice, action plan development, multiculturalism, and technology. The program comprised 150 hours of seminars and course work and 55 hours of field work at Woodson High School and Thomas Jefferson High School, both located in Fairfax, Virginia. The Greek teachers attended school functions such as faculty meetings, Parent–Teacher Association (PTA) meetings, and school board meetings. American teachers were paired with the participating Greek teachers to guide them and instruct them during the course of the program. The Greek teachers also attended cultural activities at the Kennedy Center in Washington, D.C. and the Center for the Arts at GMU, and visited nearby cities, including Mount Vernon in Fairfax, Virginia; Baltimore and Annapolis in Maryland; and New York City.

At the end of their eight weeks in the U.S., the teachers offered high praise for the GTPDP and considered their participation in it an invaluable experience. As part of the Foundation’s follow-up activities, Fulbright organized Train the Trainers workshops to help share the experiences of the GTPDP participants with other educators and enhance the multiplier effect of Fulbright programs. The Fulbright Foundation and the Greek Ambassador to the U.S. hosted an event at the Greek Embassy in Washington D.C. in October 2010 to present this initiative. Three former U.S. Ambassadors to Greece attended, giving testament to the importance of education in Greece–U.S. relations. Fulbright offers special thanks to the Ministry of Education, Life Long Learning and Religious Affairs of Greece, which approved and facilitated the leave of absence of the Greek educators. Notably, Minister Anna Diamandopoulou also met the educators during her visit to the U.S. Capitol. The minister spoke of the importance of new ideas in education and the value of educational exchanges.