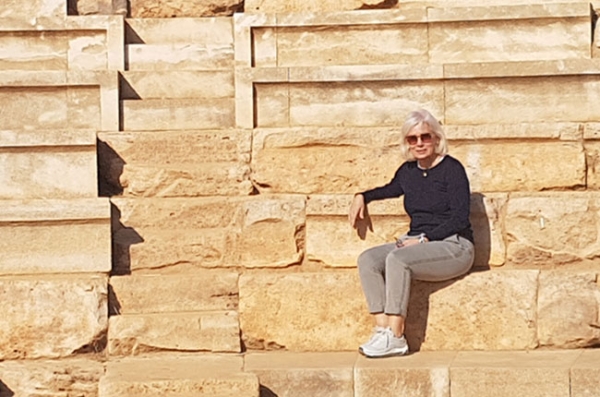 Dr. Natalia Vogeikoff-Brogan (Fulbright Student, 1986–1987) has dedicated her life to studying the material culture of ancient Greece, while managing and promoting one of the richest collections of primary resources for our understanding of modern and contemporary Greece. After graduating from the Aristotle University of Thessaloniki, she received a Fulbright Fellowship in 1986 to begin her doctorate in Greek Archaeology at Bryn Mawr College. “It was perhaps the best thing that happened in my life and the catalyst for so many other good things in my career,” Dr. Vogeikoff-Brogan noted. Upon the completion of her Ph.D. in 1993, she joined the American School of Classical Studies at Athens (ASCSA), becoming the director of its archives.

Over the past three decades, she has divided her professional life between Crete and Athens. On Crete, she has excavated a small settlement that flourished during the Classical and Hellenistic periods on the islet of Mochlos. In addition to publishing more than a dozen articles targeting the Hellenistic and Early Roman Cretan economy, she has co-edited ΣΤΕΓΑ: The Archaeology of Houses and Households in Ancient Crete (Princeton 2011), and published a monograph, titled: Mochlos III. The Late Hellenistic Settlement. The Beam-Press Complex (Philadelphia 2014). For the next two summers, she will return to Mochlos to explore the Archaic and Classical levels, which exhibit a mix of ritual and defensive behavior by new inhabitants perhaps laying claim to ancestral land.

In Athens, while managing the institutional records and special collections of the ASCSA, Dr. Vogeikoff-Brogan has built a second career writing about the history of American archaeology in Greece. As part of her new interest, she co-edited a volume of essays entitled Philhellenism, Philanthropy or Political Convenience? American Archaeology in Greece (Princeton 2012). More recently, she co-edited another volume, Carl W. Blegen: Personal and Archaeological Narratives (Atlanta 2015), deciphering the life of the archaeologist who discovered the Palace of Nestor at Pylos and its Linear B archive.

To both lay and professional audiences, she is also known through her blog, From the Archivist’s Notebook. Since 2013, she has published more than one hundred essays about objects and personalities in 19th and 20th century Greece, particularly as they relate to the American School of Classical Studies (https://nataliavogeikoff.com/). Most recently she curated a large exhibition with material from the rich archives of the ASCSA, titled Ion Dragoumis: Between East and West. One Hundred Years After His Assassination, on the occasion of the 100th anniversary of Dragoumis’s violent death in 1920.

Throughout her career, Dr. Vogeikoff-Brogan has remained close to the Fulbright Foundation in Greece. She frequently writes and speaks about the Foundation’s contributions to her home country, such as “Fulbrighting in Post-WWII Greece (1952–1953)” (https://nataliavogeikoff.com/2017/11/02/fulbrighting-in-post-ww-ii-greece-1952-1953/), and “The Best Way to Send Knowledge is to Wrap it Up in a Person: 70 Years Fulbright Greece/ASCSA” (https://www.ascsa.edu.gr/News/newsDetails/the-best-way-to-send-knowledge-is-to-wrap-it-up-in-a-person).