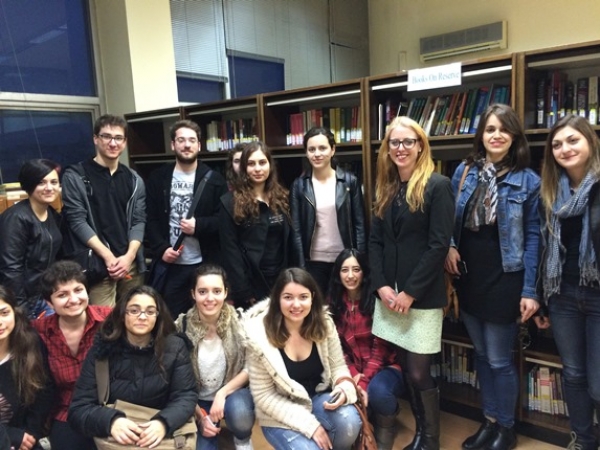 Elizabeth looks back at her Fulbright experience in Greece, her time spent at the Aristotle University of Thessaloniki and other important collaborations that she forged and outcomes of her grant in 2016-2017.

"In addition to her full-time post teaching two undergraduate courses at Aristotle University and mentoring/guiding undergraduate and graduate students there (in the areas of service-learning pedagogy and public humanities), Fulbright scholar Elizabeth Duclos-Orsello was busy developing and presenting lectures, workshops and trainings at conferences and special events across northern Greece and beyond (see below).

At the university too, she assisted with the planning for a 2016 summer school and began mapping out (with colleague and former Greek Fulbright scholar Tatiani Rapatzikou) a feasibility plan for what might be a 2017 or 2018 interdisciplinary summer institute focused on “Cities” taking place in both Thessaloniki and Salem/Boston and bringing students from both universities together for two weeks – one in each city (funding for students will be the critical factor here).

In between, this working mom of an 8th grader (who was with her in Greece) ran the Alexander the Great marathon, ran a 5K with her students, hiked Mt Olympus and assisted with the refugee crisis.

On April 1, Elizabeth Duclos-Orsello offered a two hour public film-and-discussion workshop for more than fifty attendees titled “Created Equal?: Negotiating the Social Contract. The workshop session focused on the hard but important work of negotiating, sustaining, challenging and even transforming the social contract in a democracy. The discussion was motivated by selections from three impressive documentary films about the 1960s in the US—The Loving Story, Freedom Riders and The Most Dangerous Man in America: Daniel Ellsberg and the Pentagon Papers—and engaged all those present in thoughtful discussions about urgent questions such as What do we owe each other? How can we deliver on the promise of equality that animates our democracy? Attendees explored these issues in relation to the United States and to the current situation in Greece.

On April 18 Elizabeth Duclos-Orsello was an invited panelist at an international conference Civic Engagement and the Practices of Democracy organized and sponsored by the Michael and Kitty Dukakis Center for Public and Humanitarian Service at the American College of Thessaloniki. She was part of a roundtable on “Teaching Democracy” in which she showcased work she has done in the U.S. to help develop civic learning outcomes for public university students in Massachusetts. In addition, she shared best practices in service-learning, an engaged pedagogy in which students--in any discipline or course of study--can both learn and become civically-engaged through carefully crafted service developed alongside NGOs and community groups to meet specific contemporary needs and help students gain competence in their courses of study.

During the last week of May, Duclos-Orsello was quite busy with three lectures and workshops.

On May 25, she gave a public talk as part of the Problematics lecture series organized by the Department of English at Aristotle University. Her talk “Redefining Community in Modernizing America: Cultural Production, Social Scientific Thought and Sinclair Lewis’ Main Street drew upon her current book project Bonds of Fellowship. Offering a new interpretation of Lewis’ blockbuster 1920 novel, she discussed the ways in which this literary text reflected the links between cultural production, social science, the pressures of industrial capitalism, and a shifting understanding of the concept of “community”--particularly in urban places—in the opening years of 20th century in the US.

On Friday May 27, at the Cinema Museum in Thessaloniki she spoke in front of a crowd of more than 50 on “The Role of the Humanities in Public Life” as part of the first-ever Scholar Series sponsored by the Pinewood American International School of Thessaloniki. The talk examined the ways in which the skills, competencies and knowledge gained from the humanities are essential tools for improving life in the political, economic, social, civic and personal realms. This lecture and Q&A was a success and featured on the Pinewood website and has led to requests for additional training for teachers at Pinewood.

On Saturday May 28, Elizabeth Duclos-Orsello offered an afternoon-long workshop for primary and secondary teachers (of all disciplines) at a pedagogy day organized by and featuring other Fulbright (Greek) teacher/scholars and co-sponsored by the US Consulate (Thessloniki) in Kavala, Greece. Her workshop “Bringing Museum Education Techniques to your Classroom” focused on educating teachers about some of the keys to museum education— focusing on object/cultural product-based learning, inquiry-based lesson design, and objective/object integration. Participating teachers all left with knowledge about and confidence in applying these approaches to their own class settings.

In Thessaloniki, Elizabeth has also been meeting with representatives of the mayor’s office to explore ways to link students and faculty at Aristotle University (esp. the school of English) to some of the civil-society building efforts the city is trying to implement. (Tied to a “Resilient Cities” grant the city has from the Rockefeller foundation). Possible outcome might be internships, student mentoring and any number of ways to make use of and strengthen the work of the students, the university and the city simultaneously. In addition, she has begun conversations with one member of the mayor’s team about finding students to translate a women’s leadership training guide into Greek and developing workshops to follow. She has also served in a consulting role for the leaders of the service-learning initiative at the American College of Thessaloniki as they work to refine their program.

Duclos-Orsello, who was to run the Boston Marathon this year for the second time, had a change of plans when her Fulbright came through and she began looking for a Marathon to run in Greece instead. She found one that was perfect: the Alexander the Great Marathon on 2 April 2016. After weeks of training early in the mornings on the boardwalks and hills of Thessalonki before getting her son off to school and heading to her teaching post at Aristotle University, she toed the line as one of only 170 women out of nearly 2,000 runners in the full marathon (42 km/26.2 miles) which is run from Pella (the birthplace of Alexander the Great) to Thessaloniki. Her finishing time of 3 hours 23 minutes—her fastest marathon to date--earned her the spot of 7th female finisher overall and ensures her spot in the 2017 Boston marathon. She hopes to return to run this one again in the future, ideally with a group of women completing the course together."