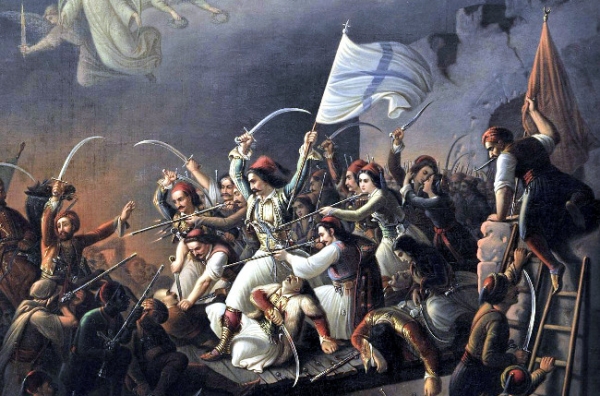 The Greek War of Independence and the United States: Narratives of Myth and Reality

To commemorate the 200 years since the outbreak of the Greek Revolution, the School of English at Aristotle University of Thessaloniki (AUTH) organized an international symposium spearheaded by Professor and Fulbright alumna Zoe Detsi, Department of American Literature and Culture. The English Department at AUTH and Fulbright Greece have enjoyed a constant and ever growing collaboration since the 1960s.

The online symposium, entitled “The Greek War of Independence and the United States: Narratives of Myth and Reality,” was held on March 19–20, 2021 and attracted a large number of participants—academics, students, and the interested public—from Greece and abroad. The event took place under the aegis of the Aristotle University of Thessaloniki as part of its wider contribution to the national and global celebrations of the bicentennial anniversary of the Greek Revolution. The agenda can be found at https://www.new.enl.auth.gr/gwi-us/.

Greek and American scholars were brought together to share their views and interpretations on a rather underresearched topic, highlighting the international dimension of the Greek Revolution and its impact on the newly-born American republic. By tracing the substantial connection between the Greek Revolution and the American perspective of and role in it, the symposium explored the social, political, and cultural interchange between Greece and the United States. The strong belief in the universal values of liberty and democracy as well as the acknowledgment of Greece’s rightful claim to national independence mobilized a large number of Americans to support the Greek cause. Recognizing Greece as the birthplace of western civilization and cherishing its legacy in their institutions, Americans established philhellenic societies throughout the United States, aroused public sentiment in favor of Greece, raised money and provisions to aid the cause, and even fought side by side with the Greek revolutionaries.

Given the turmoil in which the world currently finds itself, the symposium provided a great opportunity to revisit concepts such as human liberty, democracy, and self-government. Despite the obvious differences regarding the catalytic forces of the Greek and the American struggles for independence, both revolutions were marked by similar ideals that formulated their political rhetoric and their vision for free, democratic nations. Just as ancient Greek democracy inspired the American founding fathers’ revolutionary discourse, so did the success of their republican experiment invigorated Greek hopes and efforts towards independence.

The symposium presentations ranged from a historical perspective of the Greek reception of the American revolutionary rhetoric and the republican political system to the American governmental neutrality toward the Greek cause to the vibrant philhellenic spirit manifested in the prolific literary production of American writers and the social framework of the adoption of Greek orphans by American families. Among the speakers was Fulbright alumna, Gonda van Steen, whose paper, “The United States as a Haven for Greek War Orphans?” explored the anecdotal evidence regarding the adoption of Greek orphans by American philhellenes in an attempt to provide them with a new home and a future of educational and professional opportunities.

The symposium is attended by the exhibition titled The Greek Revolution (1821-29) Through American Eyes, an initiative of the Hellenic Centre of Stockton University, in collaboration with the School of English, AUTH. The exhibition will be displayed at the Museum of the Macedonian Struggle in Thessaloniki in October 2021. The link to the exhibition is https://www.greekrevolution.org/