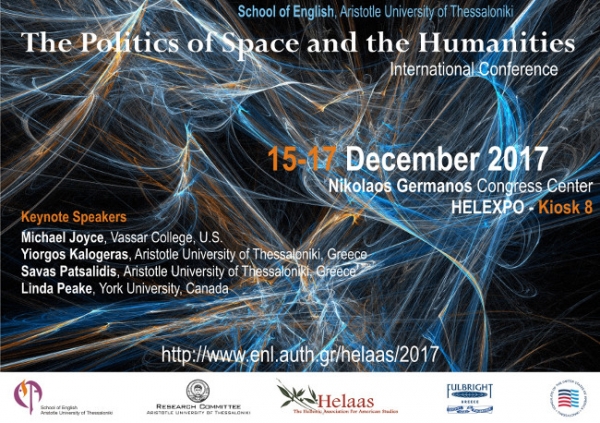 HELAAS INTERNATIONAL CONFERENCE | The Politics of Space and the Humanities - December 15-17, 2017

The Department of American Literature of the School of English at Aristotle University of Thessaloniki, Greece, in collaboration with the Hellenic Association for American Studies (HELAAS) and the support of the Fulbright Foundation Greece (70th Anniversary of American Studies in Greece) organizes the international conference with the title "The Politics of Space and the Humanities," to be held in Thessaloniki between 15-17 December 2017.

The conference keynote speakers are:

The conference has attracted a very big number of scholars and Fulbright alumni from Greece and abroad. The conference will launch the events of the 70th Anniversary of the Fulbright Foundation with special attention paid to its contribution to the development of American Studies in Greece.