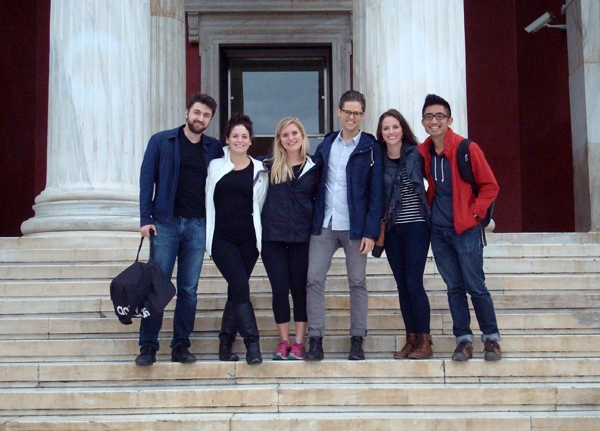 Omonia Square seems a perfect location to start a walk from with its central role in the development of the city and its moving history. It is one of the oldest squares of Athens, originally situated at the northern edge of the city, and was constructed in 1846. It forms a triangle with Syntagma Square and the Acropolis and functions as a traffic and transport hub with all major central avenues passing though it: Panepistimiou, Athinas, Stadiou, Pireos, 3rd September and Agiou Konstantinou Streets. Neo-classical buildings can be discovered around such as the four-storied hotels Viktoria/Excelsior (now National Bank of Greece), Bageion and Megas Alexandros, one by one designed by German architect Ernst Ziller who later became a Greek national and received the patronage of King George I himself.

The history of Omonia is closely linked to that of Patission (now 28th October) Street. Patission Street was inaugurated in 1841 in order to connect Omonia Square with the village of Patissia, which later developed into a suburb. For many decades, Patission provided the favorite country walk for the citizens of Athens, because of its flat surface and because it provided the most beautiful views: Parnithas in front, the Acropolis behind, Lycabettus to the right, and to the left the sea and the islands. It soon developed into a place for entertainment with coffee shops and bars on both sides of the strees, and a military band playing music. From the second half of the 19th century, beautiful and decorative buildings arose on both sides, often based on classical Greek architecture (neoclassicism following the Bavarian example) and later eclecticism and modernism. Between the two wars, Patission became a major attraction of the upcoming middle class with the area of Pedion tou Areos was laid out as a recreational park.

At the Polytechnic School we were received by the Documenta 14 team, which occupies office space in the Athens School of Fine Arts wing. Documenta tells a long story that started in Kassel, Germany, when it was created in 1955 as an international exhibition of twentieth century art with the aim of bringing Germany back into dialogue with the rest of the world after the end of World War II. For the first time in its history, the current artistic director, Adam Szymczyk, decided to split the events over two countries, Germany and Greece.