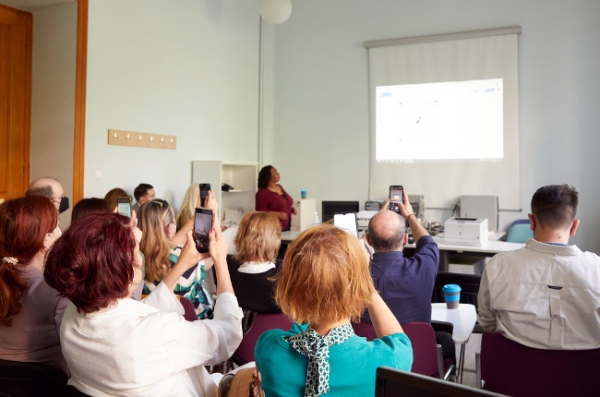 Train the Trainers Meeting and Workshop for Educators

On May 6-7, Fulbright Greece organized the Spring 2022 edition of the Fulbright Train the Trainers Meeting and Workshop. On Friday, May 6, a virtual meeting took place so as to reach out to educators in all corners of the country, and on Saturday, May 7, an in-person gathering was held at the Marasleion School in Athens.

Two pressing and current topics were on the agenda, Technology in the Classroom and Mental Wellbeing. The onset of the Covid-19 onset was sudden and unexpected and educators had little or no training, experience or preparation to change from daily life in the classroom to an educational model held online. Since at least a partial virtual reality is here to stay and be carried over into the future, it is important that educators receive support and learn about tools and applications that can assist them in making online classes inspiring and interactive. In addition, whereas mental health was an ongoing concern, the pandemic has exacerbated the need for psychological support to students who feel lonely or excluded, and to those who are economically and socially vulnerable. The majority of Greek public schools do not have an onsite school psychologist and educators have to deal with these issues as best as they can.

The Train the Trainers meetings are addressed to Fulbright alumni of the educators’ programs – the Study of the United States Institutes and the Fulbright Distinguished Awards in Teaching program -, teachers and administrators assigned primarily to secondary public schools. The aim is to bring tertiary and secondary education closer by inviting scholars in the field of education to present on the proposed topics so that the educators stay informed of recent research developments and, vice versa, for scholars to remain aware of the reality on the ground, and to encourage discussion and collaboration between the educators.

During the Friday session and in collaboration with the Fulbright Education Network, two young Fulbright scholars who are closely related to the Aristotle University of Thessaloniki School of English, Drs. Thomas Mantzaris and Despoina Feleki, spoke about Multimodal Literature and Advocacy and Civic Engagement in the Classroom respectively. On Saturday, U.S. Fulbright Scholars Drs. Scott Waring and Shirley McLoughlin touched in turn upon Teaching with Primary Sources and Fostering Diversity and Equity in Schools.

U.S. Fulbright Distinguished Teachers Maria Murillo, Erin McCarthy and Rochelle Darville, who arrived in Greece in Janaury 2022 and who have since intensively worked with Greek alumni educators, debriefed on their findings and observations of the U.S. and Greek educational systems and school environments.

The in-person meeting was held at the historical Marasleion Didaskaleion Dimotikis Ekpaideusis, housed in a 1905 neoclassical building, originally designed by Kallias and later modified by Antoniades and Mitsakis. The expenditure for the extension of the building, the furnishing and its enrichment with teaching aids were realized in 1929 through a donation of the national benefactor Gregory Marasli, who was coming from Odessa in Ukraine.

The Fulbright Foundation in Greece acknowledges the support of the National and Kapodistrian University of Athens, Department of Pedagogy and Primary Education, Marasleion Didaskaleion Dimotikis Ekpaideusis, for the venue and technical assistance, and the Athanasios C. Laskaridis Charitable Foundation and its Executive Director Dr. Angeliki Kosmopoulou, Fulbright Grantee (1990) for their assistance.