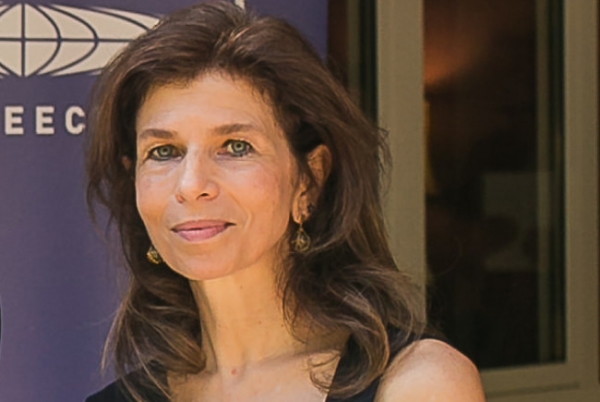 In my nearly two decades as the Executive Director of the Fulbright Foundation in Greece, this has been the most challenging year to date. Since 1948, Fulbright Greece has certainly faced its share of challenges: starting the Program in a war ravaged country, navigating through the years of dictatorship, and surviving Greece’s financial crisis. Much has changed since the first days of the Program when our scholarship recipients boarded ocean liners for the two-week voyage to cross the Atlantic. What remains unchanged is Fulbright’s commitment to furthering education, educational and cultural exchanges, fairness, equity, respect, and inclusion.

In this year of unprecedented challenges, brought forward by the global pandemic, the Fulbright Greece Annual Awards Ceremony will take place at a later time when we can safely celebrate in person to honor a great Program and all those who participate in and support it. In the meantime, we are pleased to share this Special Edition E-Newsletter.

The Annual Awards Ceremony is one of the most important events of the Fulbright academic year. At this yearly celebration, the U.S. Ambassador, the Minister of Education, and I publicly announce the Greek and U.S. Fulbright scholarship recipients and acknowledge the invaluable support of Fulbright donors who make these possible.

We are honored that U.S. Ambassador to the Hellenic Republic Geoffrey R. Pyatt and Minister of Education Niki Kerameus have graciously  agreed to address this year’s scholarship recipients with video messages that are included in this Special Edition E-Newsletter.

Each year, Fulbright scholarship recipients embark on trans-Atlantic exchanges that bring forth a world of new scholarly and professional opportunities and collaborations as well as a greater personal understanding of another culture and country. The primary funding comes from the Government of the United States, with support from the Government of the Hellenic Republic. The growth of the Scholarship Program also relies on the invaluable support from other foundations, organizations, corporations, and individuals both in Greece and in the United States. Fulbright Greece is grateful for the generosity and commitment of our donors. Thank you Fulbright Donors! Fulbright and all our grantees appreciate your commitment to our shared ideals.

Despite the many difficulties stemming from the global pandemic, Fulbright Greece is pleased to announce that for academic year 2020–2021, the Foundation awarded more than 60 scholarships to Greek and U.S. students, scholars, researchers, professionals, teachers, and artists—continuing a 72-year tradition of excellence. Scholarship recipients represent a diverse group who show promise to excel in their respective fields not only as leaders, but as responsible, mindful citizens as well.  They encompass a wide range of academic interests—from water resources management and aviation education to holocaust studies, micro-dwellings and biomedical informatics; from satellite altimetry and global development to educational robotics and STEM education, dance education/choreography, women’s studies, and public administration.

The Greek institutions where U.S. scholarship recipients will fulfill their grants include the Aristotle University of Thessaloniki, the University of Thessaly, the National and Kapodistrian University of Athens, the Athens Institute for Education & Research, FORTH - Institute for Mediterranean Studies, the American School of Classical Studies at Athens, The Hellenic Foundation for European & Foreign Policy, and others. To see the list and learn more about this year’s U.S. scholarship recipients follow the link.

Since its inception, Fulbright Greece has served as a scientific, cultural, and intellectual bridge between Greece and the United States, having provided scholarships to almost 6,000 Greek and U.S. citizens to study lecture and conduct research in Greece and in the U.S. What is less known, however, is that during the first decades, Fulbright Greece also awarded more than 2,500 scholarships to Greek citizens to attend the four U.S.-affiliated schools, namely Pierce/Deree - The American College of Greece; Athens College - the Hellenic American Educational Foundation in Athens, and the American Farm School and Anatolia College in Thessaloniki.

Fulbright Greece scholarship programs evolve and are frequently evaluated for relevance, impact, and their multiplier effects. The benefits are not restricted to the individuals who receive scholarships and participate in programs, but impact their broader professional and scientific environments and communities.

Fulbright alumni, both in the U.S. and in Greece, are integral to the success of the Program. Alumni are the Program’s finest ambassadors and remain active and engaged with the Foundation beyond the completion of their grants in various ways, including participation in review committees, outreach programs, mentoring, and the dynamic Art Supports Education, Alumni Art Series grassroots initiative to help raise funds for scholarships. This “culture of commitment” within Fulbright, of which we are especially proud, makes a difference.

Fulbright is about teamwork—the success of the Fulbright Program depends on many individuals who volunteer their time to support Fulbright programs and activities.
Special acknowledgement goes to the Fulbright Board of Directors and honorary President of the Board, U.S. Ambassador Geoffery R. Pyatt, for their ongoing support and to the U.S. Embassy in Athens, Public Diplomacy section; the U.S. Consulate in Thessaloniki; the Hellenic Ministry of Education and Religious Affairs; the Hellenic Ministry of Foreign Affairs; the U.S. Department of State, Bureau of Educational and Cultural Affairs;  the Institute of International Education and Fulbright Peer Review and Selection Committees.   I also want to recognize the hard work and dedication of the Fulbright staff—a small, yet effective team of professionals: Angie Fotaki, Els Hanappe, Andreas Ioannides, and Nicholas Tourides.

Fulbright Greece EducationUSA Advising / Alumni Share
Gennadius Library to celebrate the bicentennial of the 1821 Greek War of Independence with an exhibition honoring American Philhellenism
Building the Future—Thank You Fulbright Donors!