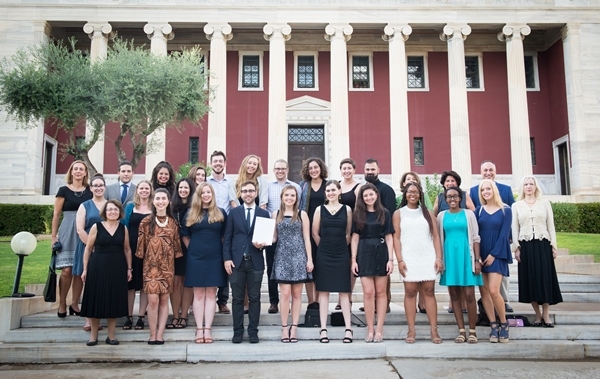 This fall Fulbright Greece hosted a multi-day orientation for its grantees. It began with an evening garden reception at the Gennadius Library in Athens on September 24th, where current and past scholars, researchers and Fulbright/HAEF Teaching Assistants (hereafter ETAs), as well as donors, Fulbright staff, faculty sponsors, and other affiliates gathered to inaugurate another year of the Greek-American elationship that Fulbright fosters. It was a wonderful opportunity for all parties to get to know each other in an unstructured setting and to lay the groundwork for future fruitful relationships.

The next day, the Athens Center kindly hosted Fulbright scholars, researchers, and ETAs as they learned about the recent history of Greek economic crisis and its broader context within the European Union through an expansive and enlightening talk by Professor Kostas Lavdas. The new Fulbrighters were also welcomed by the U.S. Embassy, reminded of the great potential for cultural exchange in the upcoming months, and also provided with a security briefing to ensure that their experience in Greece will be as smooth and safe as possible.

The following day (September 26th), the researchers and scholars were provided with their logistical orientation which helped answer questions about Greek residency, financial matters, and other details that will make their research possible and their grant period successful and in accordance with Fulbright policies and expectations. Afterwards, they were joined by the ETAs for an Athens Cultural Walk led by Greek Program Coordinator Els Hanappe. This was an exciting opportunity for the Fulbrighters to get to know Athens in a new way and open doors to events and neighborhoods that they can explore further as they settle into their time in Greece. Els provided some background information on the neighborhood of Kermaikos before leading the group into The Greek Film Archive Foundation, where were introduced to the Foundation's mission and resources before watching the 1924 silent comedy "The Adventures of Villar." The film proved an excellent showcase of how Athens looked in the twenties and a window into the early history of film in Greece. The Fulbrighters were then able to see the Foundation's library and to hear about future events and exhibitions. They then traveled over to a different exhibition space run by Athenian cultural collective NEON. Their latest photography expedition transported the Fulbrighters to the Athens of today, in all its beauty, struggles, and complexity.

After processing these two different modes of capturing and showcasing Greek and Athenian culture, the Fulbrighters were able to bond further over an authentic Greek lunch at a taverna.