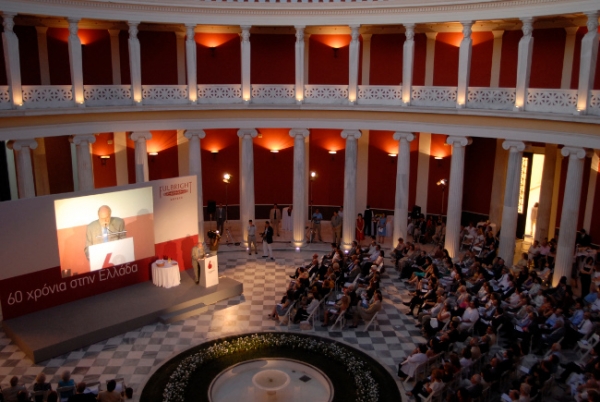 On Wednesday, June 25, 2008, more than 550 guests, including alumni, friends, and donors, gathered at the Peristilion at Zappeion Hall to celebrate the Fulbright Foundation’s 60th anniversary. Guests were welcomed by the Executive Director, Artemis Zenetou, and event volunteers/Fulbright alumni Pavlos Antoniadis, Kalli Bezevengi, Vassiliki Dimitriadi, Dimitra Ioannidou, Thodoris Zafeiropoulos and Irini Steirou, to the sounds of musician and Fulbright scholar Michalis Katachanas improvising on his viola. Following her welcoming remarks, the Executive Director read a message by Prime Minister Kostas Karamanlis that reiterated how pioneering initiatives such as the Fulbright Program are instrumental in meeting the challenges of a changing world. Speakers included the President of the Parliament of the Hellenes, Dimitris Sioufas; the Minister of Foreign Affairs, Mrs. Dora Bakoyianni (through a video-message); the Minister of Education and Religious Affairs, Evripidis Stylianidis; and the Ambassador of the United States, Daniel V. Speckhard. Two generations of Fulbright alumni, represented by Edmund Keeley and Emmanuela Truli, shared their reminiscences. Professor Keeley arrived in Greece as a Fulbright scholar in 1949, while Emanuela Truli traveled to the United States just before 9/11. The highlight of the evening was the Fulbright Awards ceremony, during which 71 grants were presented to Greek and American scholars. Executive Director Zenetou acknowledged Fulbright donors for their invaluable support to the Foundation’s Scholarship Program. She then presented the publication 60 Years in Greece: The Fulbright Foundation, which outlines the Foundation’s historic journey from 1948 to the present and includes rare archival photos and essays. The evening concluded with the screening of the film 60 Years Fulbright, featuring American and Greek Fulbright alumni. Musician and Fulbright alumnus George Kaloudis composed the film’s music score, “Swell.”