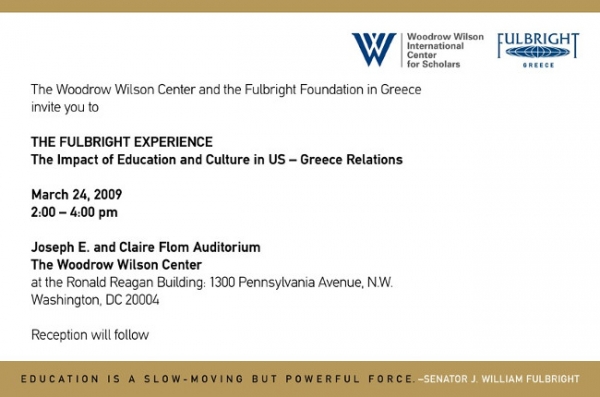 On March 24, 2009, in Washington D.C., the Fulbright Foundation and the Woodrow Wilson Southeast Europe Project organized the event The Fulbright Experience: The Impact of Education and Culture in U.S.– Greece Relations to mark 60 years of educational and cultural exchanges between the two countries. The event attracted considerable media coverage. Opening remarks were made by John Sitilides, Chairman of the Board of Advisors at the Woodrow Wilson Center Southeast Europe Project, and a brief history of Fulbright Greece was presented by Fulbright Executive Director Artemis Zenetou. Representatives from the Department of State Bureau of Educational and Cultural Affairs (ECA) and the Greek Embassy in Washington DC also spoke.

Special guests included Mrs. Harriet Fulbright and Congressman John P. Sarbanes who spoke on the Foundation’s history and the cultural and educational cooperation between Greece and the United States. Particular emphasis was placed on the special position the Greek Fulbright Program holds internationally, being the first in Europe and the second globally. Fulbright alumnae, Ms. Matilda Hadjipanagiotou (Greek Graduate Student 2008–2009) and Kristina Williamson (U.S. Student 2004–2005) presented their personal experiences of what it means to be a Fulbrighter.

Among the distinguished guests were Foreign Scholarship Board members Anita McBride and Robert McCallum and Department of State Bureau of Educational and Cultural Affairs officials, including Rosalind Swenson and Joseph McCormick.