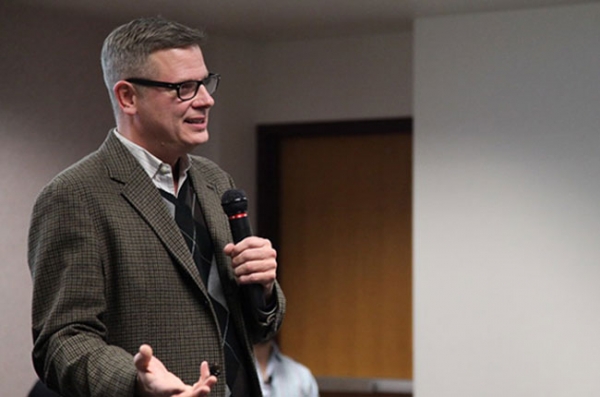 Rob Roznowski (U.S. Fulbright Scholar to Greece 2015–2016) is an award-winning actor, author, director, educator, and playwright. He is a Professor at Michigan State University (MSU) where he serves as the Head of Acting and Directing in the Department of Theatre. His work concentrates on the intersection of acting and psychology. His books include Inner Monologue in Acting (2013) and Roadblocks in Acting (2017), the latter of which he completed during his Fulbright residency at the University of Patras in Greece. His most recent book, The Introverted Actor (2020), examines current theatre training practices to become more inclusive to all learning types.

During his Fulbright stint at the University of Patras, he devised and directed a site-specific immersive theatre piece that examined public art on the campus of the University of Patras. That project led him to devise and direct numerous original projects at his home university: one about the 2020 presidential election called Listen; a piece about cultural identity for the University of Sharjah Theatre Festival in the United Arab Emirates; and, currently, 2020: The Sh*% Show. Roznowski hosted a professor from the University of Patras for a residency at MSU and has returned to Patras to lecture and teach—forging life-long friendships and networks. He sits on the board of the Athens-based organization, entitled The Makings of the Actor, and has given a keynote lecture at one of their conferences. He has served as a national and university adjudicator for the Fulbright Program.