Blue skies, aquamarine waters, long walks on sandy beaches, and all the baklava one can eat – this is the fantasy I had in mind when I learned that I would be a Fulbright fellow on the island of Crete from February to May 2019. Before I arrived, I associated the island of Crete with its breath-taking natural beauty, astonishing archaeology, and fabulous food. In reality, my Crete experience was less about the geography and food (although I loved it all) and so much more about the people. The blue skies were actually grey rain clouds most of the time; the long walks were in the hills through archaeological sites and villages, not on the shore; and the Cretan restaurants don’t often serve baklava, but they do insist on bringing the customers raki and some kind of dessert before allowing them to leave the restaurant.

My post was in the Department of Archaeology and History at the University of Crete in Rethymno. I taught a graduate seminar called “Ancient Lives: Biography and Social Networks,” with six wonderful Masters students enrolled. My brilliant hosts were Professors Katerina Panagopoulou, Kostas Vlassopoulos, Dimitris Bosnakis, and the chair of the department, Pavlina Karanastasi. On many weekends, one of my hosts would ask, “would you like to have lunch”? The answer was always “yes,” of course. We would meet around noon and head up into the hills to see waterfalls, antiquities, or a picturesque village. One time we went to Armenoi, a Minoan cemetery; another time to Eleftherna, an ancient Greek city. Around 2:00 pm, we would meet up with others for a lunch of authentic Cretan cuisine.

These meals were lessons in local traditions and culture. We tried Apaki, a marinated ham, or a pilaf with lemon rice and boiled lamb and chicken. Another Cretan dish was a tiny cheese pie, sometimes served with a drizzle of honey. I even tried a bite of kokoretsi (although I then hid the rest under my pureed potatoes). According to Wikipedia, kokorestsi consists of “lamb or goat intestines wrapped around seasoned offal, including sweetbreads, hearts, lungs, or kidneys.” I introduced a new tradition to my hosts, too, and I hope they are continuing it even now – at each meal, I would lift my glass and the first toast would always be “to Senator Fulbright!” and my friends would repeat, “to Senator Fulbright!”

After the meal, we would take a stroll wherever we were, for instance in the old Venetian town which lies at the heart of Rethymno. Here we would pause to admire an Ottoman water fountain or the Venetian harbor. The Institute for Mediterranean Studies was near the Venetian fortification walls and it was here that my hosts put together a workshop in April on my research topic, social networks in antiquity. These relaxed strolls lasted an hour or two, then it was time for coffee or ice cream, where a new faculty member would suddenly appear and join us. Looking back, I see that this was not accidental; the hosts structured the full day to help us see as much as possible, have a memorable meal with traditional cultural dishes, and be inclusive for colleagues with less time to spare, to make sure I met many people. The six-hour lunches were a part of the Rethymno experience that I will never forget.

I learned many other things around those tables, too. First, my new friends would insist on getting the bill. I will be the first to admit that I was a very bad guest, arguing with them to at least split the bill, or sneaking back to the kitchen to pay the bill ahead of time, unbeknownst to them, so that it would be a surprise. Only in the last few weeks did I realize that it isn’t about money; it is a gift, signifying care and friendship. Each time I struggled and tried to split the bill, like we do here at home, it appeared I was rejecting that friendship. Second, I learned that real hospitality means spending time together, offering and accepting the gift of friendship, and making people feel cared for. It made me think about how often I feel that I don’t have enough time to relax in the company of others in an unrushed way. In Crete, spending time with someone is an amazing gift.

I arrived in the pouring rain; a harbinger of my entire time in Crete, for it never really stopped for long. It was the people whom I got to know that made my Cretan experience warm and bright, and I know our connection will be long-lasting. They started as my hosts, became my colleagues, and I consider them now my friends. I believe that Senator Fulbright would be proud; and I remain grateful to him and to the Fulbright Foundation in Greece for making this all possible. 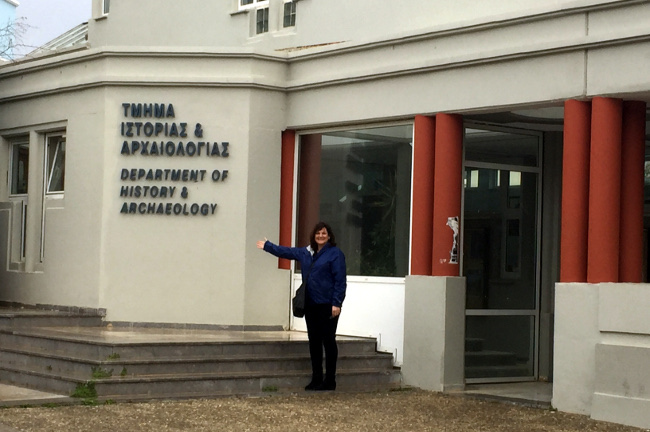