My study program met my expectations to the fullest degree. I have been privileged to work in an excellent academic environment and to regularly meet with my supervisor for discussions on written work that I produced and submitted during my stay. Thankfully our dialogue is still ongoing through emails and facetime. I audited a graduate seminar on Ancient Philosophy and, more particularly, on the much-debated topic of the role of pleasure as a motivational force in Ethics, comparing the Platonic views presented in the Republic to the corresponding Aristotelian views presented in the Nichomachean Ethics. I further elaborataed on the latter subject and after the completion of my U.S. research program, it became a chapter of my dissertation.

Moreover, I participated in other academic activities, from courses relevant to my research interests to colloquia, workshops and public talks that took place at UNC. I had the chance to see firsthand what Americans mean when they suggest that education can be fun and also how they find a way to add an aspect of practicality and usefulness to everything, including to an enterprise such as philosophy, which, from a European point of view, is essentially contemplative. I sense that I now am more informed about the merits and the shortcomings of both approaches, avoiding the respective dangers of being trapped in an ivory tower or otherwise being heavily politicized. During my stay I happily got in contact with other students, mostly Americans but also Europeans and talked with them about philosophy, the structure of their graduate programs, cultural differences, food,  American politics and also about what has emerged as a controversial issue recently, namely the attitude towards historical monuments. This debate was already on at UNC following the 2018 toppling of a confederate statue on UNC campus by students protesting against racism.

What impressed me and  I wish we could adapt this practice in Greek schools was the fact that all graduate students were able to place their projects in comparison to those of their fellows, becoming aware of points of departure and overlapping, which reveals a common ground and facilitates dialogue among them. Among other things, this experience helped me realize the essence of education, namely the exchange between teachers and pupils, which we certainly do not lack in Greece. This way I came to appreciate the devotion, determination and resilience of professors in Greece - where institutions do not provide the facilities that their American counterparts are provided with -, just because it takes much more to be excellent in Greek universities. I returned to Greece richer with all these valuable experiences that include having some new American friends with whom I am still in touch, with the memories of the colors of the Carolinian woods in the fall vivid in my mind, of the deer and squirrels running outside my apartment's window, of the sweet flavor of the first marshmallow I grilled on fire and tasted during a 'Friendsgiving' gathering at Thanksgiving, and, last but not least, with images of New York's fascinating museums and city walks that I captured during a rewarding trip near the end of my stay. 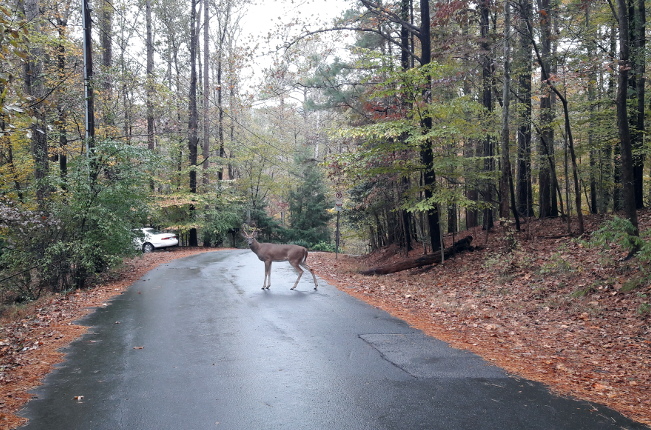