In the picturesque historical site of Schloss Leopoldskron (the real-life backdrop for The Sound of Music), 51 Seminar participants from various countries were treated to a rigorous and engaging four-day program, whose thematic focus this year was on “Images of America: Reality and Stereotypes.” The program featured six major presentations exploring the concept of “image” in relation to American culture, ranging from manifestations of the American cultural imaginary (Christopher Bigsby’s “Land of the Free?”); to the ways the U.S. seeks to project positive images of itself to the world (Martha Bayles’ keynote address, “Soft Power is Hard”); to the way the rest of the world interprets America visually (Astrid Fellner’s “Playing America: Images, Performance and Transnationalism”). These set the stage for a series of discussion panels in which the voices of experts intermingled with those of the participants on issues pertaining to images of America in various media, genres, and fields of human activity. These groups more than anything, I think, highlighted a major virtue of the Seminar which was its breadth of inclusiveness not just transnationally, but from all sorts of professional fields: the mixing of political scientists, literature and media experts, journalists, diplomats, military officers and analysts allowed a marvelous level of cross-pollination that boosted creative thought and critical incisiveness. The fact that the Seminar occurred in the final days of the Clinton-Trump presidential race added extra zest to the relevant discussions, culminating in the excellent “fireside chat” on the subject offered by Prof. Bayles (who, along with Chris Bigsby, were the academic rock-stars of the Seminar!), but really going on at all hours, on all occasions. 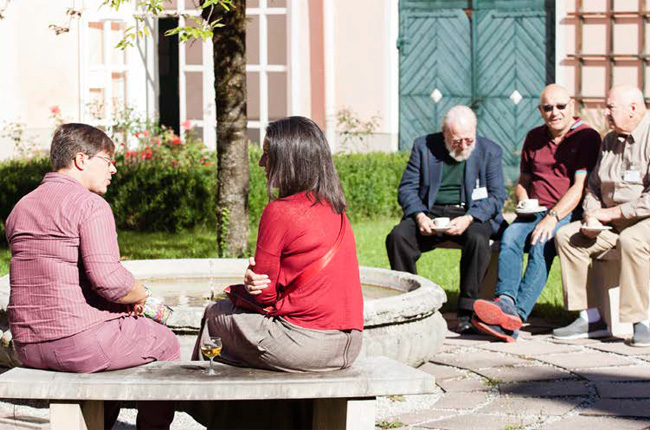