Every year, Fumel High School in France has the great opportunity to welcome Blues bands from the United States and Europe. This event gathers about a hundred students from both high school and vocational school. The American artists are interviewed in English by the students. Four students are trained to translate from American to French so that all the students can understand the exchange and be part of it. On the same day, a group of 50 students is taken by bus to an evening concert in the neighboring village of Tournon d’Agenais to discover the Blues artists on stage. After this cultural event, the students - who interviewed the artists - write a press article during their English classes. This article is sent to the Blues band to thank them.

This year, Jamila Legsir (SUSI France) invited Eleni Lykou (SUSI Greece) to the event. The alumni had developed together a curriculum scaffold, under the guidance of Dr Jeffrey Friedman, while studying the theme of « The American Dream » at the Center for Global Studies at the University of Illinois, Urbana-Champaign last summer.

Their common interest in one of the sub themes - « Dreaming About Opportunity: the Struggle for Racial Equality » - had led them to create a school project focused on Afro-Americans’ quest for equality from slavery to present day. Music is used as a main disciplinary lens in their teaching unit.

Their main educational objective was to enable the students to understand why the Afro-Americans’ struggle for equality is still an issue in the USA. The aim was also to analyse the institutional, social and cultural factors which have influenced or maintained this struggle. By developing a critical eye on the Afro-American struggle for racial equality students would be able to understand the current situation better and they will also decipher better the information broadcast by the media in their country.

In Eleni Lykou's own words:

With the afternoon groups, the meetings were mainly about the American Dream and how the SUSI experience influenced or changed our pre-existing beliefs. Students had prepared many questions and showed great interest in Greece and its financial difficulties as well as the negative consequences on education. Some students visited Greece last year so they commented on the daily life and the historical background of the country (they were impressed by their visits to the Acropolis and Delphi). Finally, I made a presentation of the economic recession in Greece to a Political Sciences group, with an emphasis on its social aspects and refugee issue in the Mediterranean. The feedback I received was really touching as students seemed to be quite aware of global issues. 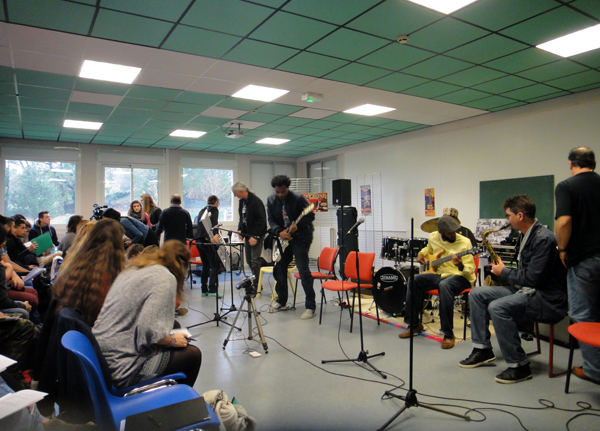