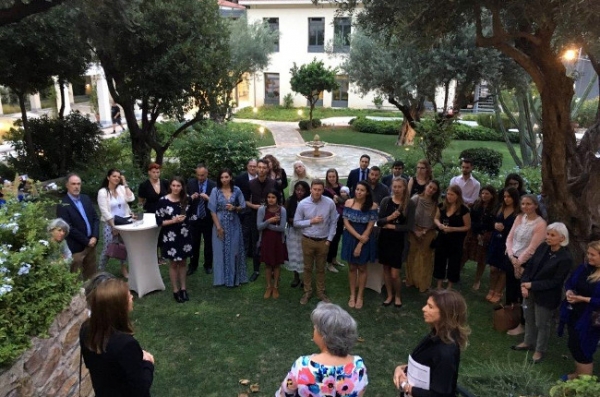 On September 4, 2018 the Fulbright Foundation in Greece welcomed 13 new Teaching Fellows to Athens for a fun and informative orientation. This event provided the newly arrived Fellows a glimpse into some of Greek life, education, and culture. The day began with welcome remarks from Director Artemis Zenetou, and introductions to the executive staff at the Fulbright offices. Following introductions, two Greek university students gave talks on their recent experiences in the United States. Their experiences embodied the cross-cultural and mutual enrichment project of the Fulbright, broadly conceived. Finally, the Teaching Fellows had the opportunity to hear from a Greek public school teacher (a Fulbright alumna herself) on the similarities and differences between Greek and American education. The talk was enlightening and provoked rich discussion about systems of education worldwide.

On September 25-27, once the rest of the Fulbright-Greece scholars and researchers arrived, the full orientation got underway. The program commenced on Tuesday evening with a welcome reception at the Lower Garden of the American School of Classical Studies where the Fulbright family was joined by U.S. Embassy Officers, Monica Cummings, Counselor of Public Affairs, and Jennifer Schueler, Cultural Attaché. ASCSA Director Jenifer Neils, U.S. Embassy Deputy Chief of Mission Kate Byrns and Executive Director Artemis Zenetou welcomed the group. The first day of the orientation was spent at the U.S. Embassy Information Resource Center (IRS) new Annex on Messogheion for a briefing on the ongoing projects that aim to increase mutual understanding between Greece and the United States. Professor Stathis Kalyvas, Gladstone Professor of Government, University of Oxford, UK, talked about his recent book, “Modern Greece: What Everyone Needs to Know,” (Oxford University Press), which describes the tangled and complex history of “Modern” Greece as a place and an idea.

Finally, on Thursday we had the chance to get intimately familiar with some important and culturally rich institutions in Athens, our new home. Led by Els Hanappe (Greek Program Coordinator for Fulbright Greece), we took a guided tour of the Katakouzenos House Museum, strolled through the Oldest House in Athens, and had a glimpse into Greece’s political history at the Museum of the City of Athens (once home to King Otto and Queen Amalia and the site of the first modern constitutional uprising). Orientation culminated in a delightful lunch at a local restaurant where we shared authentic Greek food and lively conversation.