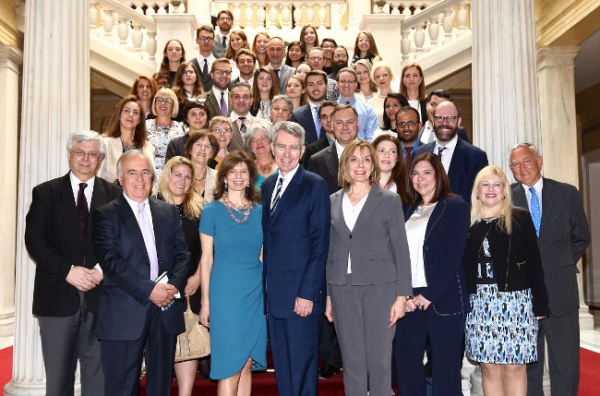 Fulbright at the Presidential Mansion

On April 23, 2018, Fulbright scholarship recipients, Fulbright Greece Board Members and staff were invited to the Presidential Mansion in Athens, the official residence of the President of the Hellenic Republic to commemorate the 70th Anniversary of the Fulbright Program in Greece. On this day in 1948, 70 years ago, the government of the United States and the kingdom of Greece signed a bilateral treaty, establishing the Fulbright Program in Greece, the oldest such program in Europe and the second-oldest continuously operating one in the world. 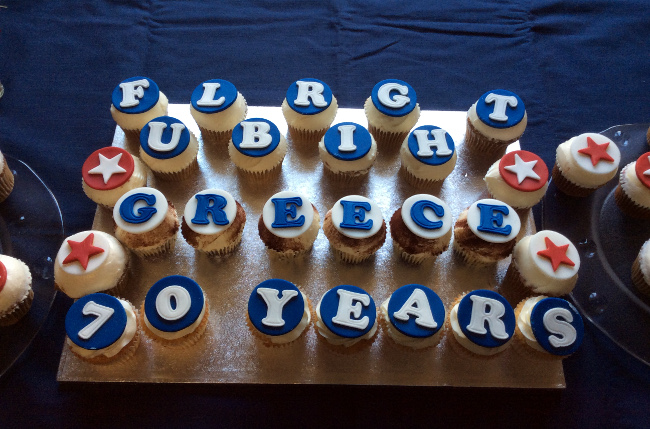 Guests gathered in the main room where eulogies were delivered by President Prokopios Pavlopoulos, U.S. Ambassador to Greece Geoffrey Pyatt and Fulbright Greece Executive Director Artemis Zenetou. Here are  some excerpts from their memorable remarks:

I welcome you to the Presidency of the Republic in order to honor both symbolically and in practice the emblematic 70th anniversary of the intergovernmental agreement’s signature between Greece and the U.S.  regarding the launch of the Fulbright program in Greece.

Against this background, Fulbright's overall activity contributes by the most appropriate means to the peaceful coexistence of States and Peoples by increasing the level of education and development, subsequently also by the effort to reduce inequalities among them. Besides, it contributes to the Dialogue of Cultures, thus weakening also false ideologies about the so-called "conflict of Civilizations". This diachronic activity of Fulbright Foundation is much more important in our turbulent times, especially in our region, when the situation in the Middle East must be a matter of concern to all of us about the very serious dangers it poses.

It is an activity that has been and is one of the pillars of the great friendship and the harmonious cooperation between Greece and the United States, which withstands and will endure time, since Greece and the US are primarily associated with the unbreakable ties of defending not only Humans and their Fundamental Rights, but also Democracy itself.
In particular, within the framework of the Fulbright Foundation's activity, Greek professors, researchers and educators have been and are able to conduct research and attend further education programs at US educational institutions and, upon their return, transfer specialization and scientific knowledge to Greece.

Kalimera, good morning, I’d like to begin, Mr. President, by saying thank you for those remarkable, wise and gracious remarks about the history of our Fulbright partnership and our relationship. I am deeply grateful. Thank you also for having us out here today to mark this historic occasion. It’s truly an honor to be here surrounded by Greek and American Fulbright grantees, the current board, and members of past Fulbright boards, and other esteemed guests to celebrate today, 70 years ago, when our two countries signed the agreement creating the Fulbright Foundation here in Greece.

The fact that the Fulbright Foundation in Greece is the oldest Fulbright Program in Europe, and the second oldest in the world, is a testament to the importance that both of our nations place on education. It is also a tribute to the binational approach taken by the Fulbright program, which promotes the interests of both our nations. For the past seven decades, the program has improved our understanding of one another and enriched our broader understanding of the world around us. I am committed to doing all that I can to further this tradition of educational cooperation and to create new opportunities for building scholarly ties between our countries in decades to come.

Your Excellency Mr. President of the Hellenic Republic, Mr. Ambassador of the United States, Messrs. Ambassadors, Ladies and Gentlemen, it is a special honor and joy to be here, at the Presidential Mansion, to celebrate 70 years of academic and cultural exchanges between Greece and the United States. On a day like this 70 years ago, namely Friday, April 23, 1948, an agreement was signed that established the Fulbright program. In 1978 at the 30th Anniversary, Senator Fulbright met at the Presidential Palace the then President of the Hellenic Republic, Konstantinos Tsatsos. That was the first and only visit. After seven decades you greatly honored us by accepting the Fulbright family at the Presidential Palace. Thank you very much, Mr President.